The Return of Rhymin' Simon 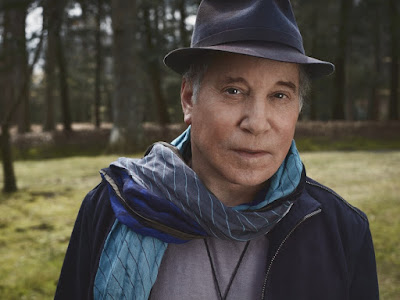 It was hard to imagine that Paul Simon would ever top his 1986 masterpiece Graceland, arguably one of the best albums ever made.

On the thirtieth anniversary of that legendary album, Simon's latest Stranger to Stranger (his thirteenth solo album due out on June 3) will be the new standard bearer which future albums will be measured.  It is certainly the best album of 2016 so far.

And it is the best on so many different levels.

Simon's voice is better than ever.  At an age where many singers lose vocal range (He is now 74) Simon has never sounded better and that includes the years with his long time singing partner Art Garfunkel.

His pen has never been sharper either.  The lyrics and themes of this collection are some of the most poignant  and humorous Simon has written.

"Wristband" is about a musician unable to gain entry into his own concert because he lacks the wristband required but is also a cautionary tale about exclusion.

"The Riverbank" was inspired by a teacher that Simon personally knew who was slain in the Sandy Hook Elementary School shooting in 2012.

And the music is simply superb and innovative.

Continuing his fascination with World Music which goes back to the Graceland album, it blends Peruvian, African, and gospel influences with electronic beats.

The album makes use of custom-made instruments, such as the Cloud-Chamber Bowls and the Chromelodeon, which were created by music theorist Harry Partch in the mid-twentieth century.

His acoustical guitar solo interlude "In the Garden of Edie" (a love song to his wife Edie Brickell) is simply beautiful.