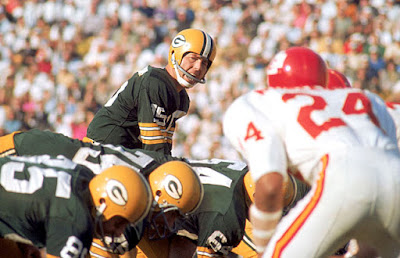 It's hard to believe that an archived copy of the television broadcast of arguably the greatest sporting event on the planet's first game is currently unavailable for viewing.

This is despite the fact that two television networks (CBS and NBC) aired what would be later known as Super Bowl I simultaneously with their own set of commentators on Sunday January 15, 1967.

This is also interesting when you consider the fact that you can easily find earlier videos from television broadcasts of the World Series, NBA Finals, NHL Finals and even NFL Championship games in their entirety on YouTube.

And throw in the fact that a guy named Desi Arnaz had the foresight to put on film the situation comedy "I Love Lucy" several years before in the early 1960's when TV shows were done live and rarely preserved for future viewing.

Maybe they didn't think the series between the upstart AFL against the established NFL originally called the AFL-NFL World Championship Game would last very long and would be a novelty at best.  It seems silly in retrospect, 49 years later, that would have been the prevailing mentality.

There is actually a two inch partial videotape of the first Super Bowl that has been preserved and is collecting dust at the Paley Center for Media in New York. (It is missing the half time show and most of the third quarter).  The NFL apparently hasn't been interested in paying the hefty price tag to the estate of the owner of the videotape.

Heck, you could take the fine money from last week's Pittsburgh Steeler-Cincinati Bengal Wild Card Game and easily pay for that video.

I would love to see that video from the standpoint of being a fan of the announcers of the game.  Depending on what version is the one that was taped by the gentleman from Pennsylvania you would see and hear a young Ray Scott, Jack Whitaker and Frank Gifford from the CBS Broadcast (Who had the rights for the NFL that season) or Curt Gowdy and Paul Christman from the NBC Broadcast (Who held the rights for the AFL at the time)

Thank goodness, the NBC radio broadcast with the late Jim Simpson (who passed away just this week) and George Ratterman is in tact (commercials and all) and NFL Films was there to put on film the game and the day's activities.

So it was with great interest when NFL Films announced through the miracle of modern editing that they were able to meticulously put together a reconstruction of the game showing all 145 plays of Super Bowl I.  The Simpson-Ratterman radio announcing team would be the voices you heard announcing the footage.

Particularly interested were those of us who lived in the greater Los Angeles area at the time who didn't even get to watch the game the first time around unless we were one of the 61,000 who played the then exorbitant price of $12 for a ticket to the game between the NFL Champions Green Bay Packers and the AFL Champions Kansas City Chiefs.  Or if we drove down to San Diego or up to Bakersfield to watch the game in a market that carried the game.

That is because for the only time in Super Bowl history the game did not sell out.  Of the 94,000 available seats in the Los Angeles Memorial Coliseum, 33,000 went unsold.

At the time, NFL games were required to be blacked out in the market of origin, even if it was a neutral site game and if it sold out.

This past Friday, the NFL Network aired the NFL Films production to coincide with the 49th anniversary of Super Bowl 1.

In my opinion it was not presented correctly.

The game film should have been played in it's entirety with just the commentary from the radio announcers Simpson and Ratterman.  That would have been more compelling than what we got which was a bunch of guys talking over the late Jim Simpson's usual impeccable delivery of a historical NFL broadcast.

It would have been better if the commentary and analysis of the game was limited for halftime or even between quarters.

I am hoping now that eventually the one tape that is available from the original broadcast of Super Bowl I will be purchased by the NFL and shown with the gaps missing from the third quarter and half time show filled in by the NFL Films work.