The Game Is Afoot One More Time 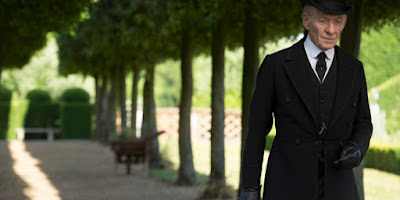 As a Sherlock Holmes fan I have enjoyed the latest incarnations of the famed fictional super sleuth.

The BBC's Sherlock, (with Benedict Cumberbatch and Martin Freeman) as well as CBS's Elementary (with Jonny Lee Miller and Lucy Liu) is good television and it's interesting to theorize how Holmes would work in the modern world with all the latest technologies at his disposal.

I'm more of a traditionalist when it comes to my Sherlock Holmes, however.  I tend to favor any derivative books, television, movie or radio adaptations that stay true to the Arthur Conan Doyle stories timelines and intent.

Part of the fun for me is to see how the detective could solve a case using his powers of reasoning and deduction along with the primitive science he had to work with at the time.

I prefer the old films and radio programs with Basil Rathbone and Nigel Bruce (as Dr. Watson).  And I really enjoyed the BBC television series with Jeremy Brett as Holmes in the 80's and 90's.

So, with that in mind I was excited when I heard that there was a film based on Mitch Cullin's derivative novel "A Slight Trick of the Mind" and that the lead role of Sherlock Holmes was to be played by celebrated British actor Ian McKellen.

The film (and book) follows a retired 93 year old Sherlock Holmes who struggles to recall and write the details of his final case while his mind begins to deteriorate.  One thing that comes out in this story was that he was not always keen on John Watson's embellished writings of his cases.

One thing I like about this story is that it follows the time and story line of the traditional Sherlock Holmes.  The story takes place in the year 1947.  The year, if you follow Sherlock Holmes in the Doyle writings, that he actually would have been 93.  He also is retired to his Sussex farmhouse and tends to his hobby, bee keeping, as mentioned in the original writings.

The thing that I was amazed by was the great cinematography of Tobias Schliessler who really brings out the wonderful texture and colors of the rich, lush and beautiful English countryside.

Solid and understated performances here by McKellen and Laura Linley (as Holme's housekeeper Mrs. Munro).  I was impressed also with the young Milo Parker as the housekeeper's son, Roger.  That kid has a bright future as an actor and I look forward to his future roles.