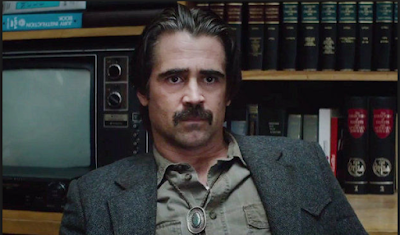 When I was young I would often see these magazines on the grocery store shelves with titles like True Crime or Inside Detective with stories and tawdry details of real life crimes and murder investigations.

The details were almost too gruesome and salacious to read. Like the proverbial train wreck you couldn't stop reading and viewing the pictures.

The pulps, as they were called, were at one time the most read of the publications, even out selling comic books.

I mention this because this is very much the feel, whether show creator Nic Pizzolatto intended or not, of the procedural crime drama True Detective on HBO Sunday Nights.

The second season of the series started last week.

Season One was Nic Pizzolatto's, who wrote two excellent award-winning crime novels (Between Here and the Yellow Sea and Galveston) first go around as a television writer and show runner and he quite simply did a great job. The series was so well received that HBO picked up the series for a second and a third season.

If you were expecting a continuation of the storyline that featured Matthew McConaughey and Woody Harrelson last season you will be disappointed.  That is because each season will feature a new story and cast of characters.

As in the first season, True Detective plays out like an eight chapter novel. A novel which happens to be a real page turner.

The only returning members of the award winning team from the first season is Pizzolatto, the writer and show runner and the musical director T Bone Burnett who once again provides a great musical  backdrop for the series.

Even the Director has changed. Cary Joji Fukunaga (Sin Nombre) who directed all of the first season is now an Executive Producer for the show and has called in Justin Lin (Fast and Furious) and the legendary William Friedken (The Exorcist) to handle the Directing chores.

The second season begins with a discovery of a crime scene and body of a public official in Ventura County by California Highway Patrol officer and war veteran Paul Woodrugh played by Taylor Kitsch (Friday Night Lights).

The on screen chemistry between the four is pure gold and the best dramatic acting by far on television so far this season.

The atmosphere plays like Film Noir akin to LA Confidential and movies of that genre.

The plan for True Detective is that each season will tell a different story over the course of the run with a different set of actors and story arc.  There will be a season Three.

But for now, as any great crime novel, I can't wait to see the next chapter of this series.