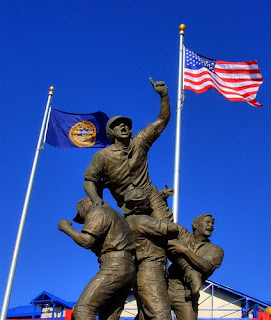 I couldn't let this week end without commenting on the NCAA College Baseball World Series in Omaha, Nebraska which opened Saturday (June 13) at Ameritrade Ballpark.

For those of us that have been to Omaha in June, we know it's a very special place.  It's like the equivalent of Woodstock for Baseball. 14 days of Peace, Love, and Baseball.

If you have a list of stuff that you want to do before you die, aka your "Bucket List", and you are a baseball fan, you must go to Omaha for the College World Series.

I went and it was something I will never forget.

The ballpark in downtown Omaha, is an absolute jewel and great place to watch a baseball game.

I was very fortunate to see one of the last series at the legendary Rosenblatt Stadium on the outskirts of Omaha.

The first thing that strikes you around the Stadium (on game day especially) is the aroma of meat cooking on the open grill. The fans are out in the parking lot cooking it up on their 'cues and proudly displaying their school colors. A lot of them are not afraid to share their bounty especially if you bring the beer.

My team, Cal State Fullerton, (who is back in the College World Series this year looking for their fifth National Championship) always rent a place down the road from the stadium and it's a great place to hang out with the team and the fans. For the week, the house is known as "The Titan House".

I met Bob in Omaha my first day there.

I was looking for a place to pick up the shuttle by my hotel and combining a morning walk when I came across a guy out for his walk too. He gave me some pointers and asked where I was staying. Turns out Bob was staying in the room right above me. He offered to give me a ride to the games. Turns out Bob was a standout player for Stanford in the 50's...a team that was one pitch away from making it to Omaha. Bob still reels from the prospect that he was so close, yet so far away.

Bob is from San Diego and he faithfully goes every year to Omaha whether his Stanford Cardinal are in the World Series or not.

It's great to have a buddy like Bob at the Word Series. Bob knew Gil who owned a "parking lot", ok, it was a front lawn where he parked cars and we got a reduced rate on parking.

The thing I really loved was that one night after my Cal State Fullerton Titans lost I found myself at a restaurant admidst North Carolina Tarheel fans...the team that beat us that night. Didn't matter. You see, baseball is the language here and it transcends team loyalties. We stayed late talking about the game and about baseball. It was so cool.  Of course, I took some good natured ribbing that night.

This year it's going to be a fun and interesting College World Series.  The defending Champions, Vanderbilt are back for a shot to repeat.  The old standbys will be there like Arkansas, Florida, Miami and Virginia.  But there is always some up and coming team or player that nobody will know about until the series starts.

And one more thing after the series was over...it was a bonus of sorts...I went to the downtown area.

Turns out Omaha is a great place to spend an evening. It's revitalized and has a great deal of upscale shops and restaurants.

I like what Warren Buffet and his friends have done with the place.