The Daredevil Is In The Details 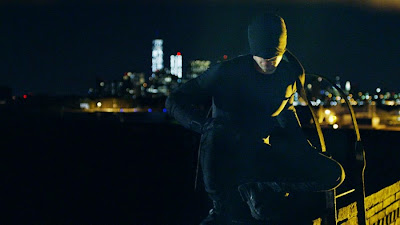 The new television version of Daredevil was released two weeks ago for binge watching on Netflix and I am a very happy camper.

I am always excited when a Marvel Comic anything comes out. So of course I had to go into my home office and pull out my limited edition Iron Man Slurpee head from Seven Eleven. I didn't put any Slurpee in it mind you, maintaining it's pristene condition. Besides that, my favorite Crystal Light Cherry flavored Slurpee machine at my neighborhood Seven Eleven wasn't working.

You see, when my neighbors (and best friends next door) Larry and Chris Dodson and my brother and I were growing up in the late 60's we used to have intense discussions about things like is there a God, Why do we exist, who is faster: Superman or the Flash? That was actually resolved. I believe it was a tie.  Which is better, DC Comics or Marvel Comics?

Or the most philosophical and important of all debates.  Jacksons or Osmonds?

The Dodson and Bacon boys always went with what was the most cool. And Marvel Comics and the Jackson 5 were most cool.

We knew anything by Stan Lee, Jack Kirby, Steve Ditko and the rest of the Marvel Universe was just drawn cooler, written cooler and looked a lot cooler than DC Comics with the possible exception of DC's Batman.

Batman was pretty cool.   We always thought Batman should have been a Marvel Comic.

The thing with most of the Marvel Comics is that these are real guys with real flaws.  Except maybe for Thor and the Incredible Hulk, they didn't really have any super powers to speak of...they just honed their skills and worked with what they had.  So we felt we could be superheroes and fight crime too.

It seemed for a while (51 years to be exact) that the coolest Superhero in the Marvel Comic Book Universe in my opinion, Daredevil,  created by Lee, Kirby and Bill Everett was always getting the short end of the stick when it came to film and television treatments.

Sure, there was the 2003 movie starring Ben Affleck and his future wife Jennifer Garner, but other than that Daredevil has not enjoyed anywhere near the success and treatment of the other Marvel creations such as Spiderman, X-Men, Ironman or the Incredible Hulk.

That oversight came to an end on April 10 with the release of 13 episodes or the first season of Marvel's Daredevil on Netflix.

The producers of the show have wisely gone back to the roots and story lines of the original comic book which means that the stories take place in the Hell's Kitchen section of New York City and Lawyer-by-day Matt Murdock uses his heightened senses from being blinded as a young boy to fight crime as Daredevil.

Showrunner Steven DeKnight brings his sensibility for creating good shows based on Comic Books to Daredevil.  DeKnight previously wrote and directed for Smallville, Buffy the Vampire Slayer, and Spartacus.

Great set design and costuming that really bring the original intent of the Marvel Comic to life which means it is dark with an almost film noir aspect to it.

This has been a good year for television series adaptations of Comic Books.

With DC's Gotham (Fox) and The Flash (the CW), and now Marvel's Daredevil (Netflix), it shows how well the old comic books stand up as good, fun, and entertaining television drama.