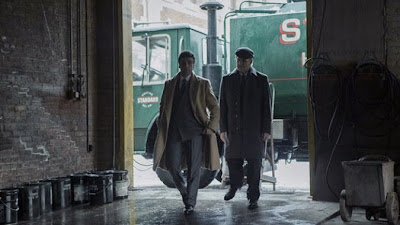 A Most Violent Year

Given the title and the pacing of Director J.C Chandor's last film, (2011's Margin Call), you might come to the conclusion that A Most Violent Year would be a fast paced and extremely violent thriller.

But nothing could be further from the truth.

The movie (which opened in theaters on New Year's Eve and at the AFI Film Festival in November) moves at a slow, but steady pace and whenever there is a violent scene, Chandor leaves it to the viewer's imagination to fill in the blanks.

It's a long, lost art but sometimes the imagination can be stronger than actually seeing it played out on screen.

A Most Violent Year takes place in New York City during the winter of 1981, one of the most violent years in the history of the city.  Thus the title of the film.

It's hard to imagine but there was actually a time when NYC was a much more dangerous place than it is today.

The film centers on the life of an immigrant, played with understated brilliance by Oscar Isaac (Inside Llewyn Davis),  and his family trying to expand their business and capitalize on opportunities as the rampant violence, decay, and corruption suck them in and threaten to destroy everything they have built.

Despite the slow pacing, the viewer is drawn into the story from the very start.  You want to know, as each of the obstacles mount,  if the main character is going to succumb to the pressure to be a part of the corruption or maintain the path of doing the right thing and obtain the American Dream in the right way.

Lurking in the background is the fact that his wife (played by Jessica Chastain) is part of a mob family. When there seems to be no alternative or way out, will he turn to her family for help?

Chandor gets good performances from Albert Brooks as Lawyer and right hand man and David Oyelowo (Selma) as an Investigator looking into corruption in the industry the main character is involved in.

Good set design and costuming that capture the period subtlety, yet effectively.

If you are coming to A Most Violent Year to see a fast paced and violent movie, don't bother.  But if you are interested in a well directed film with a good morality tale, you will enjoy this film.