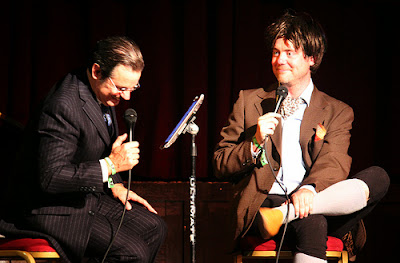 There were two television programs I was extremely fascinated with when I was a kid.

You Are There was a television and radio series that ran on the CBS Radio and Television networks from 1947 until 1972.

Meeting of The Minds , created by the legendary Steve Allen, aired on PBS from 1977 to 1981.  The show featured guests (played by actors) who played significant roles in world history.

Historical figures would interact with each other and the host, discussing philosophy, religion, history, science, and many other topics.

I really loved those two shows so you can imagine my joy when I discovered the Dead Authors Podcast and Live Show from the Upright Citizens Brigade Theatre in Los Angeles.

Once or twice a month Comedian Paul F. Tompkins (Mr. Show, Real Time With Bill Maher, Best Week Ever) brilliantly assumes the role of H.G. Wells (author of War of the Worlds and other early Sci-Fi works) fires up his time machine and interviews famous writers from history ala Dick Cavett or Charlie Rose in a live performance.

The writers are played by well-known improvisational comedians.

Dead Authors works wonderfully because of the improvisational skills and quick wit of host Tompkins and his guests who have honed their skills performing live at UCB Theater in Los Angeles.

Unlike You Are There and Meeting of The Minds which were heavily scripted down to the word, used the actual words of the historical figures, and acted out like spontaneous conversation, Dead Authors is totally improvisational and played for comedic effect.

Which has lead to some pretty funny stuff like the time Wells criticized Jules Verne for his approach to writing.  Like, "A League isn't really a measure of depth...it's more horizontal" and "You are just observing things like. Oh look, there's a Giant Squid.  A Giant Squid is an actual thing...it's not science and it's not fiction!"

Tompkins does the research on each of the literary figures and asks the comedians questions that can be answered anyway they want.  He never asks for a fact or a date.  He will for instance, state a fact or an actual event and ask a subject how that makes them feel which gives them the freedom to answer anyway they would like.

Listen to all past installments and new installments on iTunes.  If you have the chance to see the show live at the UCB Theater, do so.  Check the UCB Theater website for upcoming shows.  The promos for the show, which are funny by themselves, can be seen on youtube.

The show also benefits 826LA, a nonprofit organization dedicated to supporting students ages six to 18 with their creative writing skills and helping teachers inspire their students to write.

826LA's writing lab is fronted by the Echo Park Time Travel Mart, a convenience store catering to time travelers. All proceeds from the sale of their products (i.e., harpoons, togas, and dinosaur eggs) go to the student programs.