ARTIC Both Impresses and Disappoints 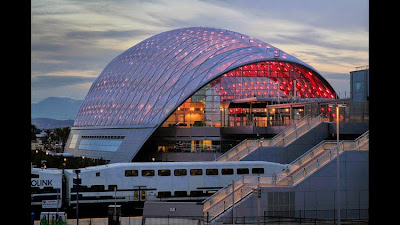 As a frequent train, light rail, and bus rider, it was inevitable that I would eventually end up at the newest Transportation Hub for North Orange County, CA or ARTIC.

ARTIC is an acronym for Anaheim Regional Transportation Inter-Modal Center.

As I walked around the facility for the first time I had mixed feelings about the place.  There are both good and not so good things about this Center.

The structure which is wrapped in metal, glass and ETFE, rises three stories off the ground, and emits a pink incandescent glow at night is arguably the most interesting Architectural Landmark in this region since the Crystal Cathedral or Disneyland Matterhorn.

If I didn't know any better and I was viewing the building from the 57 or 5 Freeways I would think it was a new Concert Hall or Sports Arena (ala Long Beach's Pyramid).  It was in fact designed by the same folks (HOK) that designed the neighboring Honda Center and were involved in the renovation of Anaheim Stadium.

There are several parking spaces for your car between Katella Avenue and the entrance of ARTIC.  The Parking lot also doubles as the lot for JT Schmidts, a popular sports bar across from the Honda Center (Home of the NHL Anaheim Ducks and a Concert/Event Venue).  Both Honda Center and Anaheim Stadium are within walking distance of ARTIC.

The first thing that impressed me as you walk into ARTIC is the Airport-like Digital Arrival/Departure/Destination Boards. Train Information is on the left and Bus Information appears on the Right.  Information for all Trains and Buses served by ARTIC whether it be Amtrak, Metrolink, Greyhound, OCTA, etc. are displayed on those boards.  Ticket/Information offices for all entities are located under the respective info boards.

Built on the banks of the Santa Ana River in a location once proposed as an NFL Stadium and next to one of the most traveled bicycle, running, and hiking trails in the country, ARTIC also is well-equipped for the cyclist.  It has lockers and hitching posts for your bike and is a good place to re-fuel on your way to the beach or San Bernardino Mountains.

There are spots for future Restaurants and Retail businesses. At this point only one is open, a combination convenient store and coffee shop.  The Oyster Bar is scheduled to open this Spring.

I believe the future success of ARTIC rests in these retail establishments.  If you can get some really good restaurants or interesting and unique stores in there it could be a great destination for Pre-game or Pre-concert or a good place to grab breakfast, lunch or dinner.

The problem is that there doesn't seem to be enough space for retail use inside the building.  Those spaces will quickly fill and there should be room for more.  It could be a really nice mini-mall.

There are plenty of tables in the waiting area and it is a nice bright spot to meet, eat, socialize and wait for a train or bus.

At this point ARTIC is more friendly to Bus Riders than Train Riders.  All Bus Bays are immediately outside the perimeter of the building and a short walk away.

On the Bus side, ARTIC services Greyhound and the local OCTA.  MTA out of Los Angeles is rumored to extend their LA-OC lines to ARTIC.  They presently end up at Disneyland.

The problem in the design is the access to the Trains from the building.  I don't mind since I enjoy walking but I am sure a lot of people are not going to like walking four minutes through two bus access roads to get to Track One or going up two stories to go over a bridge and walk back down to get to the tracks.

At least at the former Anaheim Train Station the tracks were right outside within short walking distance. If you wanted to go to the opposite track, there was an underpass that was easier to get to than the hike/climb you have to do now at ARTIC.

By the way, my suggestion to you if you need to take a train that is using track two at ARTIC is actually access that side of the track through the Anaheim Stadium Parking Lot.

The other part of the ARTIC design is a personal thing with me.  I am not a big fan of this Igloo or Covered Wagon or whatever it is Design.  (I actually prefer the Covered Wagon explanation because then we could say it symbolizes the old mode of transportation into the west. )

I am more of a fan of the retro-style transportation center.  I love my hometown Transportation Center in Fullerton, CA.  It's accessible and looks like the original train station and other buildings in the area.  It could also benefit from an underpass going to track two but that could happen easily.

Even the Small Metrolink Station in nearby Buena Park has design elements that tie in to nearby Knott's Berry Farm.

ARTIC, on the other hand, stands alone in that it has no Regional Influence.

The other thing I didn't appreciate about the building of ARTIC is the way it was built.  It cost close to One Quarter Billion Dollars of Tax Payers money and without going into specifics it was a real boondoggle and financially benefitted a few former Anaheim City Officials turned Lobbyist/Consultants.

It was built on the premise that it would be a station for the California High Speed Rail Project which is another Boondoggle and a Maglev Train that would go from Anaheim to Las Vegas (which has not been approved).  Both projects (which may or may not happen), as well as a proposed Trolley that would run from ARTIC to nearby Disneyland Resort Area are several years away, if they happen at all.

So what was the rush?

Anaheim already had a nice Transportation Hub in the Parking Lot at Anaheim Stadium.