Playing The Games In All The Unusual Places 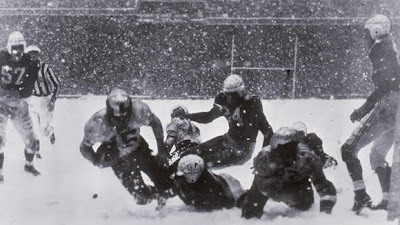 When they play the National Football League Championship Game , aka The Bowl game we can't say the name of, this coming February, it will be in an unusual place.

For the first time in the history of the Bowl Game which we can't say the name of, it will be played outdoors in the cold weather climate of the Northeast at MetLife Stadium in East Rutherford, New Jersey.

You know, the stadium where Jimmy Hoffa is buried in the foundation.  Oh wait that was the old Giants Stadium in New Jersey.

Sure they've played this game in Minnesota and in the most brutal winter that Dallas, Texas has ever known but those games were played under a dome or roof where the temperature is always nice.

There are a lot of folks that are upset with this arrangement but I for one welcome it.

When you look at the old photos of NFL Championship Games before 1966 the year the Bowl Game that we can't say the name of started, it was almost always played in the coldest places in America's lower 48 in the Dead of Winter.  Even in New York City.

They didn't have Domes or retractable roofs or even Luxury Boxes.  These games were played by real men with thin helmets and short sleeve jerseys and very little padding with the heartiest of fans with hot chocolate, hot coffee or alcoholic beverages,  braving the elements to watch.

So think of this year's big football game as a bit of a throwback to the good old days.  In fact, football is the only game that elements should and do come into play.  It's part of the culture of the game.

I am hoping for a day like they had in Philadelphia last weekend during the Eagles game with a lot of Snow.  That will be fun to watch.

On the other hand, another sporting event will be played in an unusual place in January.

As part of the National Hockey League's Stadium Series the Ducks and the Kings will play outdoors in Sunny Los Angeles at Dodger Stadium, a baseball stadium.

Last time I checked, and I have lived in the Los Angeles area for my entire life, there has never been a significant snow storm or it never gets cold enough on January 26th to freeze water.

But apparently they have the technology now to freeze and sustain an outdoor ice rink in warm climates.

Just because you can, doesn't mean you should do it.

First of all, Dodger Stadium isn't even a good place to watch a baseball game, let alone a hockey game.

Second of all if you wanted to do something real authentic, the game should be played on roller blades in Southern California....at the beach on concrete.  Most of the Hockey players that came out of Southern California started on Roller Blades and played outside.

This isn't like this years upcoming Bridgestone Hockey Classic in Michigan where the game between two of the original six, the Redwings and the Maple Leafs, will be played in the University of Michigan's Big House Football Stadium.

It will be cold on that day with snow and real frozen ice and the guys will be playing outdoors like they did when they were kids in front of 100,000 of your closest friends.

That will be fun to watch.