How The NFL Playoffs Should Be Revised 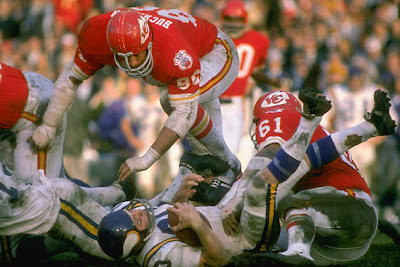 Now that the NFL has listened to me and fixed the Pro Bowl by eliminating Conference affiliations, making the game more interesting, and the NCAA has taken my suggestion and will be going to a playoff for Division 1 Football next year, it is due time to propose my next big plan for football.

No one has asked me and nobody is knocking my door down to be the next NFL commissioner, but I think The NFL Playoffs need to be revised.

First of all, how many times over the years have you heard while watching the NFL Conference Championship games "This is the real championship right here" or  "This should be the Super Bowl"?  The reason is that the two best teams in the NFL, in any given year, could in fact come out of the same conference.

This year, for instance, I could make a strong argument that the two best teams are the Seattle Seahawks and the San Francisco 49ers, both from the NFC and both from the same Division, and they should be the two teams playing in the Super Bowl.

Since the merger of the American Football League and the National Football League in the early 1970's, the idea of having two conferences that still, with a few exceptions, follow the original AFL and NFL alignments, is quite frankly archaic.

Also troubling is the fact that a team with a losing record could make the playoffs by winning a bad division as the Seahawks did a few years ago.

It has long been established and planned that both conferences are on equal footing and have come a long way since the 1969 Super Bowl when the Upstart AFL's New York Jets shocked the world by beating the established NFL's Baltimore Colts.

My new NFL plan would eliminate Conferences and Divisions altogether and throw all 32 teams together into one League that would look a lot like a Premier League Soccer Fixture.

At the end of the season, the top twelve teams would make the playoffs.  The top four would get a bye in the first week as they do now.  I actually like the arrangement now in the NFL when they award the top teams for having good seasons with byes into the second round.

So, if the 2013 season were to end today, under my new arrangement, Seattle, Denver, Kansas City,  and New England would get first round byes while New Orleans, Carolina, San Francisco, Arizona, Indianapolis, Cincinnati,  Philadelphia and Baltimore would make the playoffs and be seeded and play each other in the first round.

I would also propose that the regular season schedule change so that each team plays a different team every week of the season as opposed to the current schedule of playing teams within their Division twice a year and teams from a designated Division from both Conferences.  This will allow for more of a level schedule and keep good teams from feasting on not so great teams and inflating their record.

I would also like to see the bottom four teams get demoted to a minor league each year and four teams promoted to the NFL, so we wouldn't have to see the sorry Texans, Browns, Jaguars and Raiders next year.

But that probably is stretching it.

I better stop while I am ahead.