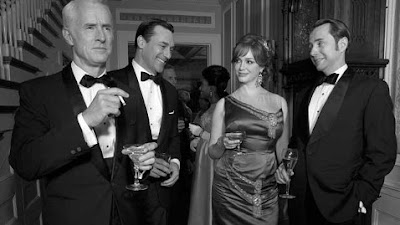 It's that time of year again. HBO and Showtime must be kicking themselves again about now. The best show on television, The Mad Men, which opens season six this Sunday, was reportedly pitched to both networks by creator Matt Weiner (best known for his work on the Sopranos) and they both turned him down. Kudos to AMC for having the courage to pick it up. Now a wider audience can watch this show.

In preparation for Season Six, I totally emersed myself in reruns of season five again.

What's not to like? From the very stylistic Hitchcock-like opening credits with RJD2's Beautiful Mine running behind it to the attention to detail of the period (Mid 60's Madison Avenue) to the great writing, directing and plotlines....this is one of the best shows in a long time.

Set in New York City, Mad Men takes place in the early to mid 1960s at the fictional Sterling Cooper advertising agency on New York City's Madison Avenue and centers on Don Draper (Jon Hamm), a high-level advertising executive, and the people in his life in and away from his office. It also depicts the changing social ideas of 1960s America. Which means there is a heck of a lot of cigarette smoking, misogyny, and women testing the boundaries of the sexual revolution.

The series is directed wonderfully by Alan Taylor and Tim Hunter. Each of the actors and actresses in the show give us a glimpse into life in the early 60's. Draper's ex-wife for instance (played by January Jones) showed us the model of an early 60's perfect housewife and mother trying to live up to the ideal. Great acting also from Elisabeth Moss, John Slattery and Vincent Kartheiser.

Award highlights include winning the Primetime Emmy Award for Outstanding Drama Series four times, for each of its first four seasons; its fourth win tied the record for serial dramas set earlier by Hill Street Blues (1981–1984), L.A. Law, and The West Wing (2000–2003).