Listen To Le Show For The Shearer Pleasure 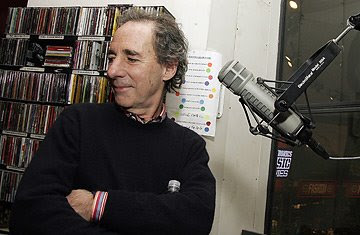 In Southern California we are privileged to be exposed to a lot of good radio (and bad radio too for that matter...but that's a numbers thing). My favorite guilty pleasure on Sunday mornings is tuning into Le Show at 10 AM on KCRW 89.9 (in Los Angeles) and spending an hour laughing, thinking, and listening to great music with Harry Shearer.

Harry Shearer has volunteered to do this wonderful show since 1987 but his roots to LA radio go back to when he was with KRLA in the late 60's and part of an ensemble radio group called The Credibility Gap, which took an irreverant look at the daily news. He would later be on KPPC and KMET, the Mighty Met, in the early to mid 70's.

For the rest of the country Shearer is probably best known for his over twenty voices on The Simpsons and his two much-publicized run-ins as a writer/performer on Saturday Night Live.

He once said that he parted ways with SNL two times over creative differences. "I was creative and they were different", he quipped. He has been seen in the movies Spinal Tap, Mighty Wind, and For Your Consideration just to name a few and is the voice of Cable's TV Land.

Shearer got his start as a child actor in Abbott and Costello Goes To Mars and was Eddie Haskell in the pilot episode of Leave It To Beaver.

Le Show is a combination of parody sketch radio comedy utilizing the many voices of Shearer, along with news and commentary about media and other areas of interest. Those elements are interspliced wih a great and diverse musical playlist from Shearer's personal collection. This is Shearer's playground and you can feel the pleasure he derives in doing this each week for the past 21 years.

Listen to Le Show on Sunday mornings in Santa Monica over Public Radio KCRW 89.9. Or for the rest of the country listen on kcrw.com or harryshearer.com Le Show is also linked from Bosco Radio: Arts and Entertainment Channel. See the sidebar for details and a reminder to contribute to your local public radio station.