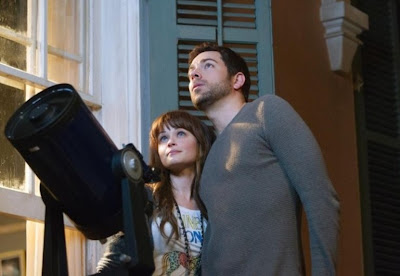 So I wound up watching the 'Hallmark Hall of Fame' TV movie 'Remember Sunday.' And I was jealous of the guy Gus. Not so much that he was the one to get the girl, beyond the fact she was cute this otherwise wasn't exactly your usual Hollywood dreamgirl. But didn't he have it good that whenever she walked out of his life again, he could just wake up the next morning and forget her totally.

But then Hollywood could make even a brain injury that leaves you unable to remember anything since your accident seem exciting. Remember 'Memento?'

I remember a PBS program I worked on with a segment about a man who had a fencing saber poked up his nostril: 26 years later he had never held a job, never remembered anything from the moment that point drove home on forward. It didn't go so well for him as it did for the hero of the movie. In fact I could envy the man.

He seemed to have carved a new life so many in the audience without his affliction might be seeking. And everytime the new girlfriend walked out on him, as she did on a regular basis, Gus could wake up the next morning with noone to think about, starting his day content. Ah, to dream.

Not that she was so horrible, but she still managed to remind me of the women I could have just never thought of again.

So starry eyed over the man he had been, expecting she could have that man she never knew back. How many like her have I known; the waitress slowly moving through college, much to say about this big future she thinks she has but never really moves toward; me the college graduate working in my field, no matter how far out in front of her I am I somehow don't measure up.

How many times could I have woken up the next day with no idea? Sounds wonderful. If I can forget where my phone is so much, why can't I forget a bunch of women who really are forgettable? If I could only completely forget just one, how about Nikki? She became familiar enough with who I was that she arranged this awkward chance introduction, which led to her talking about how she considered herself 'Well raised' and all kinds of things that tipped me off she was husband hunting.

You'd think she'd find it inevitable that I'd say something about her drinking. And that she'd realize it would be the end of things when he says things like she needs to get her drinks into her to be happy and she considered her drinking more important to her than I was. But it was good I still remembered when she called close to a year later all upset, wanting to talk to me.

I had to tell her I might have been more impressed that she had called if she hadn't been drinking. But I guess I won't be able to just forget.

Anymore than the one old girlfriend forgot the five year boyfriend who had given her the teddybear. The one she was carrying every time we went out. Yeah, he gave her THAT teddybear. Before they broke up years earlier. I had a hard time forgetting about THAT when she insisted on having it with her every time I saw her.

The one other thing the girlfriend in 'Remember Sunday' had in common with so many of mine was her ability to be nice for the moment. But they always are in Hollywood, the prototype being Reese Witherspoon.

Ah, didn't her arrest shatter so many illusions. Although it was no surprise to many more, she's been public about her arrogance and feelings of superiority. She has just the image for a career shipwreck over this if the public doesn't forget quickly. Because the public doesn't want to believe in the supposed heroine of 'Remember Sunday' who is always so quick to cut and run when she realizes she's found yet another man who doesn't fulfill her rescue fantasies.

They want to stick to the TV show 'Castle,' so like so many before, 'Remington Steele,' 'Moonlighting,' etc. The earnest, hard working heroine who just can't find a way until she meets the smooth talking operator whose only talent is for making things easier.

You could plug Witherspoon into any such role you wanted. And the audience would probably forget she said that she was too big a star to have HER husband arrested for drunk driving. What is it like for him, living with someone who gets that way? Is that why he drank too much?

Is that why Ernie's marriage has lasted? Ernie had such a head injury shortly after he left the Marines. We were working on his motorcycle, he'd ask me "So how are we going to do. . . ?" And I'd remind him of how many times he'd asked me that since we'd started, he had been taught how to make a special effort to remember such things but he was too caught up in what he was doing to remember to use his memory skills.

And right that moment he was also forgetting all the problems his very flakey wive caused, mostly he didn't remember what she had done, though he remembered something about how it had been bad at the time. Could be why Ernie was so usually happy.

He can't remember why he shouldn't be.

And I can't forget the depiction of Gus, the man who can't remember, waking up unfettered, ready to go about his life before he read all his notes intended to keep him up to date on the developments in his life.

When the girlfriend took out all the references to her he was left content to not think about her.

In the morning I have nowhere to be until noon, I'll wake up with no rush to get out of bed. And I'll find myself thinking about. . . . Nah, I can at least put that off until the time comes.