Exploring New England On The DownEaster 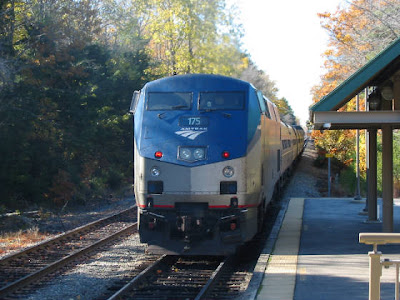 I love exploring this country of ours.

I have been to most of the fifty states in my lifetime but it seems like I am only scratching the surface on exploring and finding interesting things about America.

And as you know, if you have read The Daily Bosco before,  my favored forms of transportation are the train and my two feet.

One of my all time favorite train trips is from Boston to Northern Maine on the Amtrak DownEaster.

The DownEaster leaves from the North Boston Station that is in the same building as the TD Garden, the home of the Celtics and Boston Bruins or the first time I came into that station, a Bon Jovi Concert.  It's also a great hub to one of the better subway systems in America.  Getting out and around Boston without a car is pretty simple and easy to figure out even for an out of town, native Southern Californian like myself.

North Station is also within walking distance of the North End, Faneuil Hall Marketplace, the Museum of Science, and other famous Boston attractions.

The DownEaster goes through three New England States: Massachusetts, New Hampshire and Maine.  The scenery along the shore and Colonial America is extremely picturesque, especially during the Fall with the tremendous explosion of color.

The staff on the DownEaster is one of the best groups I have encountered.  Friendly, knowledgeable of the area and the service was great.

The DownEaster is also equipped with wi-fi which was great for my portable rolling office.  I wrote a film review, posted from my seat and got caught up on some work while I made the 2-1/2 hour trip from Boston to Maine.

The seats are comfortable and reclining with lots of legroom to stretch and plenty of space to move around which is more than I can say for the Airlines. There are Fold-down trays, overhead reading lights, and plenty of electrical outlets making it an easy and comfortable experience for traveling and meeting new friends.

The Downeaster Café, a short walking distance from my seat and centrally located, is also available for a snack, Green Mountain Coffee, or a light meal.  The onboard rolling Café also features many local and regionally made products such as fresh Amato's Italian sandwiches, Wicked Whoopie pies, and Shipyard microbrews, to name a few. The menu offerings change often to reflect seasons and special events.

The second stop out of Boston is Haverhill, Mass. The station is a few steps from the historic district and also affords some wonderful views of the Merrimac River.

Eat at the UNH Dairy Bar which is in the station.   The food at the Dairy Bar features delicious, healthy and sustainable fare with the focus on local products.  And of course the ice cream is to die for.

And Between this time of year through the end of September, you have to stop at the Old Orchard Beach in Maine.  The Old Orchard train platform is just steps away from the beach, pier and the attractions in this   scenic location.

I fell in love with Old Portland, Maine.  I enjoyed walking the old Colonial cobblestone streets next to the Port watching the boats and ships come in and out of the harbor, and breathing in air of the Atlantic Ocean .  I saw an Indie film at an old Theater, ate delicious meals at the local restaurants and had time to get out to a Portland SeaDogs Minor League baseball game.

That was interesting and fun for an old baseball fan like myself, because the SeaDogs, an affiliate of the Boston Red Sox have built their ballpark to the same dimensions as Boston's Fenway Park....down to the green monster in left field.  By talking to some of the fans there, they love the parent team, the Red Sox and frequently make the trip on the DownEaster from Portland to Boston to watch the Sox.

The DownEaster trip to me, was like a really good movie.  I definitely wouldn't mind returning, seeing and experiencing it again.