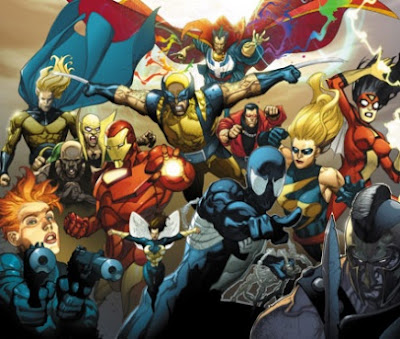 Marvel Comics is not just a comic company. It's a state of mind. It's the state of cool.

Ironman3 is out in a few weeks, and I am a happy camper.

I am always happy when a Marvel Comic anything comes out.

So of course I had to go into my home office and pull out my limited edition Iron Man Slurpee head from Seven Eleven yesterday in preparation of the event.  I haven't put any Slurpee in it either since the last Marvel Movie...maintaining it's pristene condition.

You see, when my neighbors and friends next door....Larry and Chris Dodson and my brother and I were growing up in the late 60's we used to have intense discussions about things like is there a God, Why do we exist, who is faster: Superman or the Flash (that was actually resolved...I believe it was a tie) which is better...DC Comics or Marvel Comics or the most philosophical of all debates...Jacksons or Osmonds? The Dodson boys and the Bacon boys always went with what was the most cool. And Marvel Comics and the Jackson 5 were cool.

I must admit I did not get into the story of the Avengers too much when I was a kid. I was really more into Spiderman and Daredevil. Oh I knew enough to hold my own in a conversation on Iron Man for instance... I know all the basics....wealthy industrialist returns from war three parts removed from a body bag and builds himself a cool iron outfit of armor and then decides to fight crime. But all the fine details like how his girlfriend a redhead freckled lady named Pepper Potts who once two timed with Iron Man and his non-crimefighter self Tony Stark and ran off to Colorado with Tony's business partner and got married and had to adopt because they couldn't have their own kids or the fact that Tony Starks became an alcoholic...I missed that part.

But I did read a few of the Avenger comics because as we and the Dodson boys knew anything by Stan Lee, Jack Kirby, Steve Ditko and the rest of the Marvel Universe was just drawn cooler, written cooler and looked a lot cooler than DC Comics with the possible exception of DC's Batman. Batman was cool. We always thought he should have been a Marvel Comic.

The thing with most of the Marvel Comics is that these are real guys with flaws. Except maybe for Thor, they didn't really have any super powers to speak of...they just honed their skills and worked with what they had. So we felt we could be superheroes and fight crime too. Later on, not to digress, Steve and I took to the Hardy Boys. Pretty soon we were convinced that all of our neighbors were criminals and they needed to be investigated. We even started to speak like the Hardy boys or maybe it was Tom Swift.."I wish I could throw this baseball for a strike," Steve said aimlessly.

But go back four years ago...think about it.  Robert Downey Jr. as Ironman?  Are you serious? Then I started thinking it really doesn't matter who they put in as Ironman...he's covered up in an iron suit. They could put me or Uncle Fester in there and nobody would be the wiser. And Gwyneth Paltrow as Pepper Potts? I was thinking Bonnie Raitt or Melissa Etheridge. Or Haley Mills. Or Carrot Top.

Anyway, see you at a showing of Ironman3 in a few weeks...I'll be the one sipping a Slurpee out of an Iron man head.