How Watching Television Got Me Into Reading 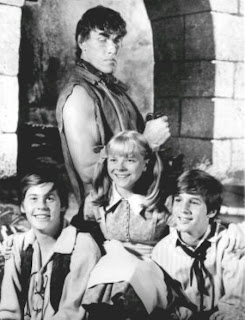 By Doug Vehle
The Daily Bosco

You just have to be careful asking me such questions as how we might get kids reading more. Because I'll have to tell you that for me, it all started with television.

I may have had my sister teaching me before I started kindergarten, but my reading didn't really start until I watched reruns of an old TV series. My life has never been the same since.

'The New Adventures of Huckleberry Finn' was a failure on its' initial run on network television, the kind of thing you'd expect to disappear and never be seen again. Somehow this 20 episode misfit managed to keep popping up either chopped up into segments as part of Saturday morning kids shows or full length just thrown on the air on Sunday afternoon.

Which is where I discovered my first literary idols, on the medium so many blame for destroying literacy.

I wonder how many kids read the novels about Tom and Huck because of this one TV show.

Huck, apparently during his 'Clean' period after he's been taken in by the Widow Douglass or after being adopted by Aunt Polly before the 3rd novel, is taking a shortcut home with Tom Sawyer and Becky Thatcher one night though the very cemetery where Tom and Huck witnessed the murder of Dr. Robinson. Only to find the vengeful killer Injun Joe waiting for them. (Or perhaps his ghost, he was dead by the time Huck was living in the neighborhood with Tom and Becky.)

The three flee into McDougals' cave, a labrinth clearly on the edge of eternity where these children are concerned. Once again, onimous things happen to them in the caverns; as Injun Joe's threats echo they emerge in the fantasy world of Tom Sawyer.

A world I became hooked on as I watched this show, sending me running to the Fullerton Library to become one of the rare 10 year olds to read 'The Adventures of Tom Sawyer,' which Samuel Clemens clearly intended as reading for adults.

What a shock to my classmates when I turned in that book report at the beginning of 5th grade while the others were reading books like 'Pippi Longstocking.' I would spend the next 4 years of gradeschool reading the 4 published novels and turning in book reports, as well as debunking myths about the books and making my teachers angry. It was great.

I just can't understand why this TV show wasn't popular. It certainly captured the blurring of reality and imagination that was the life of Tom Sawyer. Thugees in India, tribal cavemen, Lilliputions, Tom immediately recognized all from his books and knew just how to deal with them. Or thought he did.

The always obliging Huck was always there to help, sometimes knowing it was against his better judgement. Beck, little defined after appearing only in the first book, carves out a suitable contrast to the boys. With Injun Joe (Remember Lurch in 'Addams Family?') looming over them.

At first I have to admit I was a bit disappointed at the discovery that the novel version wouldn't include a version of Captain Nemo or a battle with the Gorgon, but I came to see the things that have made the series of novels legendary for nearly 150 years now. And to listen to people pretending they'd read either or both of the first to books but say things that proved they hadn't, oh what fun for a preteen.

In the 8th grade one of the priests came into class talking about dealing with people who don't know what they are talking about, what a lesson that was. He remarked on his trip to the library looking for 'Tom Sawyer' to finally read the novel but was unable to find it. When the librarian tried looking under Samuel Clemens he left in disgust.

It didn't go over well when I held up my hand and said that Samuel Clemens was the authors real name; you know how some people try to make a mockery of being pointed out as wrong. Oops, just so happened I had a copy of 'Tom Sawyer, Detective,' the last published in his lifetime, in my possession.

What do you know, it said Samuel Clemens right on it. So the goofball nun says that Samuel Clemens is someone who wrote novels using Twain's characters and that's not a Twain novel. You can see how there couldn't possibly be nuns in heaven, right? Oh well, there's nothing usual about people believing it all ended with 'The Adventures of Huckleberry Finn.'

And they're missing out, because 'Tom Sawyer Abroad' starts out with Huck telling about how Jim and himself were somewhat local celebrities after their trip down the river on the raft and coming back on the steamboat, but Tom was a bigger celebrity for making the steamboat trip BOTH WAYS. Huck has become a journalist covering the doings of noteworthy Tom; who gets the pair and Jim kidnapped and taken away in a flying machine (The novel should be taking place about 1850) to Africa in quite a science fiction turn for Clemens.

'Tom Sawyer Detective' is a murder mystery where Tom begins to fulfill Judge Thatchers' desire to see him practicing law, Tom becoming defense attorney for his Uncle Silas who shot him in the leg in 'The Adventures of Huckleberry Finn.' So Clemens' original concept lent itself well to the freeform travels of the TV series, which put Tom, Huck and Becky in Ireland, Egypt, even in the presence of Hercules.

I like to wonder at what else they might have done with the TV series had it continued. Clemens worked on additional novels with Tom and Huck, most notably the trip to the Indian country alluded to at the end of 'Huckleberry Finn' and the political satire 'Tom Sawyers' Conspiracy.' Tom and Huck cross over into all genres. I wonder where he might have gone with 'School House Hill,' which offered the potential exchange of a cautious Huck warning Tom they should stay away from the Devil himself when he comes to visit. Huck might have said 'But Tom, he's the DEVIL.' To which one thrilled Tom would respond 'But Huck, think of it, THE DEVIL!'

Even if they were just fictional characters, bringing the pair to life for the TV show requires some suspension of disbelief for the audience. I mean, a straight haired Tom Sawyer? TALLER than Huck, mind you. But that's what it took to get just the right chemistry between the juvenile actors, which I certainly thought was there.

I've never had the chance to see the TV movie 'Back to Hannibal,' a TV movie that reunites an adult Tom, Huck and Becky, but what little I've read about it gives the idea that it's based on the almost finished 'Tom Sawyers' Conspiracy,' with Jim accused of murder and the "King" and the "Duke" reemerging. What a crock when a review on Internet Movie Data Base scoffs at Huck as a journalist even though Clemens original work remarks that Huck is indeed writing these stories for publication and that Huck increasingly becomes the avid reader that Tom is.

And the mocking of Tom as an attorney when its told he is to be one in the first novel and he acts as one in the last, well, some people just have to be loud about books they've obviously never read. The reviewer didn't even mention that the boys are from St. Petersburg, it was Clemens himself who lived a short time in the city of Hannibal, Missouri. A monument, statues of Tom and Huck, immortalize the work in the community said to be the inspiration for their home.

So as someone who as an adult just had to go back and reread all the published and unpublished works about Tom and Huck just the same as with 'Lord of the Rings,' I can say there's room for optimism at the proposed new series about the boys in their 20's (On the eve of the Civil War) in a steam punk world of New Orleans.

Well, there would be a dawning steam punk era at the time, I've certainly read of them dealing with that before.

Maybe this show will get more kids reading, as the last show did for me. Oh please, promise me that Hollywood won't screw this up, this time. But even if they do, it won't ruin Tom and Huck for me. Samuel Clemens left me wanting more.

Dammit Doug. You keep stepping on my past. I thought I was the only one watching the New Adventures of Huck Finn.