The New Steve and Edie 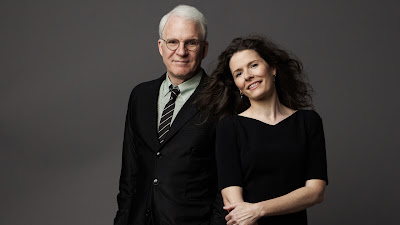 We all knew Comedian, Author, and Actor Steve Martin could play the Banjo.

Whenever he could, he would work it into his comedy routines which always left us wanting to hear more.

So, thank goodness, starting in 2010, Martin started recording wonderful Blue Grass and Roots Albums and went out on tour to perform with some of the best names in Blue Grass Music bringing this uniquely American art form to a wider range of people as well as help introduce the music to a new generation.

His first album The Crow won critical acclaim and Grammys to boot.

His latest album, a collaboration with the wonderful folk singer Edie Brickell entitled Love Has Come For You (Due out Tuesday) takes his music to another dimension.

My favorite comment Martin made regarding the banjo was "It's hard to play a sad song on the Banjo."  That may be true, but he forgot to tell you about all the subtle and wonderful nuances that could be attained with the instrument and by using the right collaborators.

In addition to Brickell, on this, his third Blue Grass album,  Martin utilizes his old friends The Steep Canyon Rangers, guitarist Waddy Wachtel, and Sean Watkins to great advantage. But, for me, the best parts of the album are when it is just Martin on Banjo and the beautiful and sweet vocals of Brickell.

One of the things that Martin certainly is, is a great writer and he is at his best when writing novellas or short vignettes which when you think about it lend itself well to writing lyrics for songs.

Each song here is like a little story with you wondering, as in the case of "Siamese Cat", what the back story was with lyrics like "I like your Siamese Cat...but I don't like your daughter"

"Sarah Jane and the Iron Mountain Baby" and "When I Get to Asheville" are beautiful songs entrenched in the Blue Grass tradition while "Get Along Stray Dog" gets back to the playful and fun lyrics prevalent on Martin's earlier albums.

This entire album, in fact, is a pure joy to listen to and is destined to win more awards for Brickell and Martin as well as enjoyment from their and Blue Grass/Roots fans alike.