This Revolution Actually Does Start On Your TV 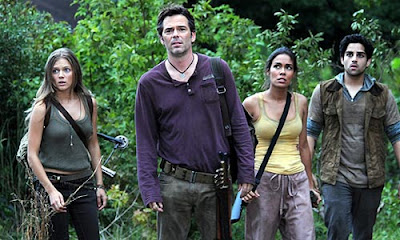 I was really good with NBC's drama series Revolution (which came back after a long hiatus last Monday night) until the scene where the lead characters pass by a destroyed Wrigley Field in Chicago overgrown with ivy (of course).

Oh man, why did they have to do me like that? Is nothing sacred?

But other than that where else can you find on episodic network television shows that involve swashbuckling, shooting with muskets, bows and arrows, and grenade launchers...and that was all in the first episode.

For the uninformed, Revolution is the story of what would happen if we lost power.  The power goes out and not even a car or Double A battery is generating any.  The story is picked up about five years later when the power is still not in.

By that time our country has split up into tiny factions and militias run by warlords and thus the excuse for the sword play and bow and arrow action.  Then the story is about trying to find who knows about why the power is out and how to get the power back on.

Great set design and just good old fashioned escapist drama here.  Not too much acting going on here...just playing....big difference.  Nobody is going to win Emmys for acting on this show..but it is still fun to watch.

Revolution seems to follow the Twin Peeks and Lost method of story telling.  Which is "We the writers have no idea where we are going with this so we'll just make it up as we go along" .

Revolution Producer JJ Abrams (Lost) is good at this.

You'll be informed on a need to know basis.  You get hooked and you stay along for the ride into this alternate universe.

This particular show raises a boat load of questions.  Like, why did all or the power go out, even our car batteries?

Usually when that happens, isn't there some Alien life form sucking all the energy up to build and power a space ship to get back to it's home planet?

Or, is the power outage just confined to the United States?  What about the rest of the world?

I guess we'll just have to keep tuning in each week to find out.