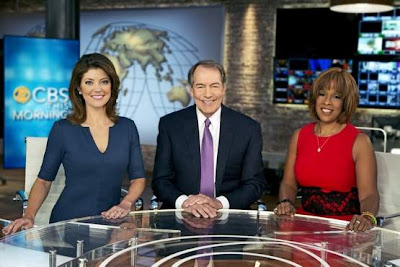 I've developed a ritual in the morning, as I make my way from my home in North Orange County to my office in South County, on how I get caught up on the news.

First of all, I listen to C-Span Radio's Washington Journal and NPR's Morning Edition (via the Bosco Radio link) Between breaks I scan the AM radio dial for news. Where I live in Southern California, I can actually pick up news stations in Seattle, San Diego, Salt Lake City, San Francisco and Los Angeles early in the morning without the aid of Satellite radio or the internet.

The various local shows from around the Western United States are interesting because you get a real sense on what is happening in those regions. Something you couldn't get with the national programs or on Satellite Radio.

When I get to the cafe where I have breakfast and coffee, however, I always make sure I am watching The CBS This Morning while I read the newspaper.

I realized that I actually preferred the CBS offering over the Today Show or ABC's Good Morning America.

What really sold me on this latest entry to the national morning news show market is when Charlie Rose decided to come on board. I have long been an admirer of Rose's work dating back to the 1980's when he was on CBS's Nightwatch...an overnight news program I used to watch when I was trying to help get my infant children back to sleep at night. (I spent a lot of time watching Nick at Night and Nightwatch in those years).

His interview style, as evidenced on his nightly PBS show, The Charlie Rose Show, (which we link to on Bosco Radio) is wonderful. He asks the questions which are on our mind. And he asks tough questions and is not afraid to challenge his subject. One day a few weeks back he prefaced a follow up question to Pat Buchanan by saying, "You know that's not true...".

I also like Gayle King. Yes, I know she is Oprah Winfrey's best friend. But here, on this program, she gets out of Winfrey's shadow and really shines. In most cases, she is better than Winfrey at the interviewing process. Plus, she actually was the only one able to get Winfrey on the show this week talking about the failure of the OWN network and how she plans to turn it around.

And I would be remiss to not say anything about the good work of the third anchor. Norah O'Donnell. She completes Rose and King with her professionalism and journalistic sensibilities.

O'Donnell served as staff writer for Roll Call, where she covered Congress.

She moved from there to be a commentator for the NBC News Today Show, Chief Washington Correspondent for MSNBC, and from September 2003 to May 2005, the White House correspondent for NBC News.

O'Donnell was also a contributing anchor for MSNBC Live, and a rotating news anchor on Weekend Today. O'Donnell has done reports that have appeared on numerous NBC News broadcasts, including NBC Nightly News, The Today Show, Dateline NBC, and MSNBC.

But one of the best things about this show is the resources of CBS News. For instance, there is a lot of good footage from CBS' 60 Minutes program each week that gets left on the cutting room floor simply because there is not enough time to get it into a 20 minute segment. But no more. Although we have seen the extras on the 60 Minute website for quite some time, we now get to see this extra footage during the week on this show which helps flesh out the stories even more and gives the anchors and reporters a chance to elaborate.

A nice set design which is at the same time functionable, business like and warm complete the show.

My only minor criticism on this and other morning shows is when they go to the local affiliate for local weather, traffic, and news. I would like to see them design their set to complement the national set design. But that is just aesthetics and has nothing to do with content.