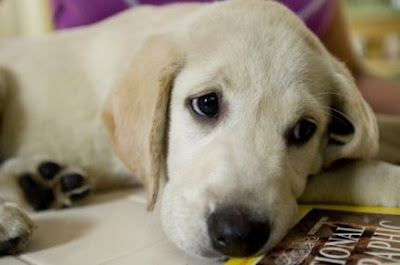 Marley and Me was on television recently and I just had to see it again.

This is partly because I'm a sucker for dog films and I have a seven year old Yellow Labrador named Chad who you probably have seen when I walk him around my hometown of Fullerton or when he gets out on his own.

I don't know why but he always ends up at Del Taco on Placentia Avenue when he goes out on his own. Must be the Egg and Cheese burritos. But I digress.

I always compare notes when I watch Marley and Me. And, truth be told, I am in awe of John Grogan (the author of the book by the same name and the real subject of the movie) and how he parlayed observations about his dog and life into a major cottage industry. I want to be like John Grogan when I grow up.

As films go, it wasn't that bad and I could write a review on the movie but that's not what I'm going to do here.

When the movie first came out about four and a half years ago, I read an article about how a lot of parents were surprised about the adult content of the film and they would have never taken their families to see it if they knew it had adult themes that are probably too sensitive for young eyes.

This all of course was due to the movie's marketing campaign. This movie was cleverly marketed in trailers and print ads with these adorable puppies that play Marley just being flat out naughty. Those antics are funny to watch if you are a five year old child and don't have to actually repair and pay for the damage of the aftermath of a dog's bad behavior. But as anybody that has read the book can attest, the story is not really about the dog.

The animal and his antics are just the vehicle to see the ups and downs of a relationship between two people and their eventual family. It's a slice of late 20th/early 21st century life.

Then I got to thinking. Is Marley really any different than any of the other great dog films? To me it's the same film as the classics but set in a different era.

Think about it. Old Yeller gives us a glimpse of life of the Coates family after the Civil War and we witness their struggles. And there are some important and often graphic facts of life...and death in this film. And if you think you shed a lot of tears in Marley...you haven't seen the ending scene in Old Yeller. Yet Old Yeller is right there in the family section of your local video store.

Rin Tin Tin gives us a peek into life at the end and right after World War I.

The original Lassie movie, which by the way is the ultimate road trip film through Scotland and England when you think about it.... gives a look at a families struggles, often heartbreaking, in the Depression era.

But dog owners already know all this. Our dogs are there through all the great and not so great moments of our life. They're family except their love is not conditional. They are the backdrop of our own personal movie and they are the star.