Just Got An I-Pod: Now If I Can Just Find It 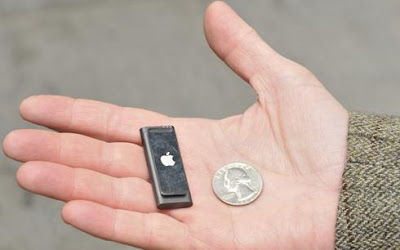 I believe the people at Apple...more specifically the ones at Apple that make the I-Pod... are pure geniuses. I got a Shuffle recently and it is about the size of a tie clip. This way it is easier to lose so you have to buy more i-pod shuffles. At $79 a clip (pardon the pun), this could add up.

Actually it kind of looks like a money clip too. Which is really good for keeping your $79 together for the next I-pod after you lose your current one. Oh Great, I have a hard enough time keeping track of my full-size I-Phone, this is going to be really difficult for me.

A feature of this version is that it has a voice over mechanism so you know what you're listening to. Sort of like a DJ. I thought one of the purposes of the I-pod was that we didn't have to listen to DJ's. I take that back...if the voice sounds like Robin Banks or Mimi Chen then that would be good. If it sounds like Gilbert Gottfried...not so good. This voice thing makes me long for the day I had to squint to see what was on the I-pod screen.

Used to be, back in the day, that if you had a thousand songs or records people knew it. It was like a badge of courage. Especially on eight track. Man what a large collection he has...It fills eight boxes in the back seat of the Mustang. Now with a device that stores 1000 songs almost on the head of a pin...not so impressive.

On this I-pod Play, pause and volume controls are now located in a small remote on the right earbud cord. Again a great move by the Apple people. This keeps your fingers busy so you can't flip off the device as you become increasingly agitated by it.