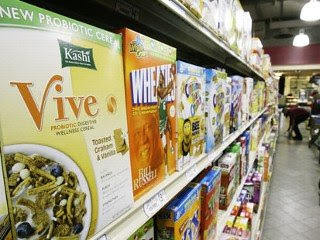 Kashi is not just about healthy foods. It's the culture of making correct choices.


By Allen Bacon, The Daily Bosco

I have to be very honest with you...Not a big Kashi food fan. I think most of their cereals taste like cardboard and I always end up with scrapes on the roof of my mouth. If I want to hurt myself in that manner...I'd rather just eat Cap'n Crunch...at least it tastes better.

But there is one thing that I really appreciate about Kashi Foods which is based in La Jolla, California. They are trying to make a difference in all aspects of their business. Whether it's healthy foods or trying to get people to be socially and environmentally responsible. They are definitely doing their part. To get an idea of what I am talking about visit their website at www.kashi.com

What really made me pay attention recently is the way they package their food. I have been involved with the Printing and Packaging Industries for over 30 years. I have never seen such a conscientious effort put into packaging to reduce impact on the environment.

To take a closer look I grabbed one of Kashi's frozen entrees. The first thing you notice is that it's not your typically glossy food box. The reason for this is that all of Kashi's packaging is printed on 100% recycled paperboard material. That's interesting because the graphic design of the box made me want to buy it still. It looked just as appealing as a Lean Cuisine frozen food box.

The thing you may not know right off the bat though is the fact that the box is printed with a vegetable oil based ink or soy ink without UV coating (which releases harmful Volatile Organic Compounds or VOC's in production). So that means we are not depending on a petroleum based ink. The other thing is that the box is around 11% smaller than a typical box. But it's the proper size for the food. According to Kashi, this is going to reduce waste by 227 tons. That's a huge number. Also the plastic tray the food is in is 100% recycled also. But one blogger quickly noted that it would be less impact if the tray was recylced biodegradable paperboard. Not sure if it would fly with the FDA but it's definitely a great idea.

And the food? I had the Chicken Pasta Pomodoro and I must say...I absolutely loved it. It's healthy with the seven grain pasta going on and the grilled chicken breast, red peppers, and yellow squash with just the right amount of tomato, garlic and Basil Sauce.