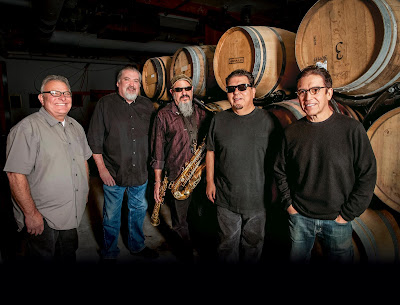 Since I (and most people from my generation) have pretty much memorized the entire Creedence Clearwater Revival music catalog and can play most of their music, I was particularly interested in a new project that re-imagines CCR with a Latin flavor.

Since CCR will probably never get back together , this is what we can do to pass the time until they decide to bury the hatchet and record again in addition to listening to their original albums.

Quiero Creedence- The Latin Tribute to CCR  with my favorite Latin groups and artists arrived last week and is, in a nutshell, a fun and interesting listen.

Some of the songs are entirely sung in Spanish while others are in Spanglish (a combination English/Spanish) as on "Green River" and Gaby Moreno's musically faithful rendition of "Lookin' Out My Back Door". The remaining are in the original English.

The album is at it's best when it is at it's funkiest and A Band of Bitches take of "Feelin' Blue" complete with a rap is pretty cool, even funkier than CCR's original and my favorite on the album.

El Tri takes the tempo up on "Proud Mary" to Ike and Tina Turner pacing in a fun rendition of the iconic song.

Ozomatli covers "Bad Moon Rising", while Juan Gabriel performs a soulful and heartfelt "Have You Ever Seen the Rain" which is a rarity because Gabriel rarely sings somebody else's music.

Salvador Santana with Asdru Sierra from Ozomatli take on probably the most Latin of all CCR songs , "Molina" and add an incredible rap to it.

We'll probably never know what the original surviving members really think of this album, but I have to think that  Stu Cook, John Fogerty, and Doug Clifford would approve of this 14 Song homage to one of America's  all-time favorite rock bands.

As Henry Garza of Los Lonely Boys who does a great version of "Born on the Bayou" with their own lyrical twist, said,  "Those guys  (CCR) were some of our teachers...so this is an great honor to do this and to honor our teachers".