Why The Rams Belong Back In Los Angeles 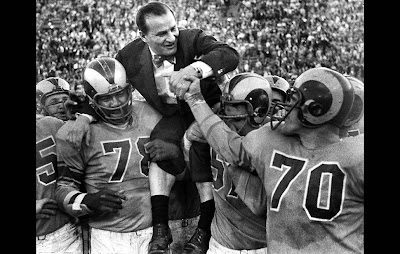 This past week brought the latest in a series of ideas to bring the National Football League back to the Greater Los Angeles area.

After 21 years of not having any NFL franchise, apparently Angelinos might now get two back.

The latest scheme would have both the San Diego Chargers and the Oakland Raiders returning to Los Angeles and sharing a newly-built football stadium in Carson.

The Raiders moved and played in Los Angeles at the Coliseum from 1982 through the 1994 season before returning to their city of origin, Oakland.

The Raiders have been the only NFL team based in Los Angeles to win a Super Bowl.  They accomplished the feat in 1983.

The idea of two franchises sharing a Stadium is not revolutionary in the NFL.  The New York Giants and New York Jets have shared a Stadium in New Jersey for  31 years.

The idea of teams in the same professional league splitting a Stadium is not even new in Los Angeles.

Up until last season the Major League Soccer Champion LA Galaxy shared the StubHub Center in Carson with the now defunct Chivas USA.

The NBA's Los Angeles Lakers and Los Angeles Clippers have shared the Staples Center for 16 years.

The Los Angeles Angels and Los Angeles Dodgers of Major League Baseball shared Dodger Stadium for three seasons in the early 1960's while the Angels built their own Stadium down the 5 Freeway in Orange County.

While the idea of having back two former NFL teams that had a history in Los Angeles is intriguing I just hope it's not those two teams.

It doesn't seem fair or right to the loyal fans that teams that have been part of their respective communities for so long should be able to move.

Even though the Raiders were in Los Angeles for twelve seasons, they will always be the Oakland Raiders to me.

Just like when 48 years after being in the greater Los Angeles area, my beloved Los Angeles Rams abandoned their fans, ripped our hearts out, and moved to St. Louis.

Ever since then, I could care less about the St. Louis Rams.  They abandoned us.  I didn't even care when they won a Super Bowl.  That wasn't my team any more.

My childhood memories are filled with the Los Angeles Rams.  When as kids we would play pick up Football games on the Elementary School playground, I would pretend I was Roman Gabriel at Quarterback.  My friends on defense would imagine they were members of the "Fearsome Foursome", the defensive front four of the LA Rams in the 1960's.  (Merlin Olsen, Deacon Jones, Rosey Grier, Lamar Lundy).

My dad once bought plain white football helmets as gifts for my brother and I.  He said he would paint any team helmet we wanted.

My brother wanted the Baltimore Colts helmet.  I of course had to have the Los Angeles Rams.  Which was a good thing for my Dad because he only had to buy one color of spray paint - Blue.

I was extremely fascinated as he masked off the respective logos on the helmets and was thrilled when he brought the finished product into our room.  Mine had almost perfect ram horns.  I say almost, because the actual ram horns on the NFL helmets start a little closer together.  But that was ok.

I still have that football helmet to this day and will never let it go.

Sure we never won a Super Bowl and it seemed like we were always getting so close only to get beaten by either the Minnesota Vikings or Dallas Cowboys in the 70's in the NFC Championship Game, but we loved our Los Angeles Rams anyway.

Before I was born the Los Angeles Rams seemed to always be in the Pre-Super Bowl Era NFL Championship game.  From 1947-1955 the Rams with the likes of Norm Van Brocklin,  Bob Waterfield, Tom Fears, and Elroy "Crazy Legs" Hirsch made four appearances and won an NFL Championship in 1951.  They would routinely set records in attendance surpassing the 100,000 mark on more than one occasion and set a single game record that stood in the record books for almost fifty years.

But through a sequence of mismanagement and competition with the then Los Angeles Raiders in the mid-nineties, the writing was on the wall and the Rams were not long for Southern California.

I was at one of the last Ram games at Anaheim Stadium.  I remember looking up from my seat amongst a sparse crowd and seeing people in the luxury boxes watching the Raiders game on the television while the Rams game was in progress.

But when the news came, it still was a very sad day for the fans that grew up being Los Angeles Ram fans.

That's why out of all the scenarios of an NFL team relocating to Los Angeles, the only one that makes the most sense and would fulfill a sense of karma would be if the Rams came back to the place they called home for nearly fifty years.

To the people of St. Louis, sorry.  Thank you for taking care of the Rams for twelve years. But we want them back.  Get your own team.  Or get your old team (the Arizona Cardinals) back.

It may very well happen with the current St. Louis Rams owner, Stan Koenke, buying land on the former Hollywood Park Race Track in Inglewood and proposing a new Stadium but I personally would like the Football Stadium built somewhere else.

I like the idea of tearing down Dodger Stadium and building a new Baseball Stadium downtown next to the Staples Center and in the place of Dodger Stadium a new Football Stadium to be shared between the Los Angeles Rams, UCLA and USC football overlooking Downtown LA with lots of parking spaces and a large area for tail gate parties.

You have to set priorities and an old Los Angeles Rams fan can dream can't he?