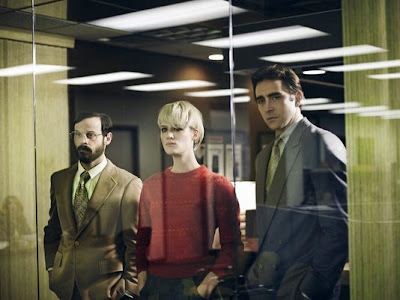 Mad Men is on hiatus and wrapping up for good next year.

So now the AMC television network has the daunting task of replacing two of the most critically acclaimed shows in television history with a brand new show and bunch of characters that they hope will equally capture the fascination of the viewing audience.

They may have done that with their newest show, Halt and Catch Fire which premieres on Sunday night June 1.

As was the case was Mad Men, the series is set in a particular decade and industry. This time it's the early 1980s and depicts a fictionalized insider's view of the personal computer revolution.  And like Breaking Bad, we have anti-heroes that instead of cooking meth are indeed breaking the law on another level by reverse engineering the IBM PC.

But theren lies the dilemma.  If they envision that the PC can be more than even IBM imagined, then isn't that a noble cause?  Who's the bad guy here?

The title refers to the machine code instruction Halt and Catch Fire, which could cause a computer's central processing unit to cease all meaningful function.

Whether it was meant or not, the opening when Joe runs over a slow moving Armadillo in the Dallas, Texas streets with his speeding car is like a metaphor for where the show is going.  To me, the Armadillo represents the strong, but steady IBM, Joe's car is like the fast-moving visionaries and companies of the period that knew that the Personal Computer could be much more.  And if IBM gets in the way of their plans, they might just become proverbial road-kill.

The show benefits greatly from the talents of the two main young actor and actress Lee Pace (Pushing Up Daisies) and newcomer MacKenzie Davis.

From the outset, the volatile chemistry of the two main characters is shown.

Salesman, Visionary, and Svengali like Joe MacMillan (Pace) and programming prodigy Cameron Howe (Davis) may have a bad love life and hate each other sometimes on a personal level.  They realize quickly they are going to need each other.

Also important in the story line is Gordon Clark (played brilliantly by Scoot McNairy), a washed-up computer engineer who gets a shot at redemption and his wife Donna (Kerry Bishe) who is a brilliant computer engineer and mother.

The scenes between McNairy and Bishe as they struggle with the proposal that Joe MacMillan lays out to them and the possible ramifications of their actions are the best in Episode 1.

As someone who was just starting in the work force in the early 80's the producers have nailed the set design of the offices and the feel of 1983 Dallas, Texas (The Silicon Prairie as they used to call it).  Even when the characters are away from the offices like when Cameron is found in a bar playing Centipedes while listening to a Sony Walkman belting out 80's Alt Music, you realize this show appeals on several different levels.

If the first episode is any indication, I am anxious to see how the show plays out during the summer.