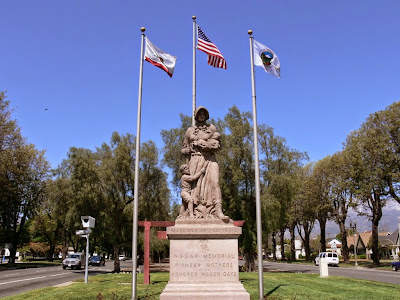 For those of you that are new to The Daily Bosco, I need to start this article by saying that I am what is known as an avid Urban Walker or Hiker.

Sure, I've done my share of hiking in mountains, rural areas and trails, but I really enjoy walking through and around small towns and big cities, absorbing and learning the culture of the places I visit.

As is the case with many Americans and Tourists, I also have a fascination and love affair of America's Highway, The Mother Road....Route 66.

That love affair started out as a kid when my Dad would take our family on cross country trips across America on Route 66.  I have driven or ridden the entire length of The Mother Road several times in my life. I have also traveled the full length of the journey on the Amtrak Southwest Chief passenger train which roughly follows the same route.

Recently, I found myself in Arcadia, California for business and as I was on my way to lunch I noticed that I had crossed Route 66.  The moment brought back a flood of memories of my travels on the famous road.

I had a few minutes to walk so I started walking the road in Arcadia and taking in all of the sights and sounds.

Then it occurred to me that it would be a very cool thing to walk the entire length of Route 66.  Why?  Because it's there and it's good exercise of course.  But, I felt by walking each step and slowing down, I could absorb even more than if I drove it again.  I could also use it as an excuse to review some of the eating establishments, famous sites and give updates on how the road is faring today.

What I really wanted to do was walk the entire length of the road, from Santa Monica to Chicago in one shot.    People have done that before....I'm not the first to think of it,  but, I quickly came to my senses.  My reality and commitments would keep me from doing that.  So I would do it on the weekends by driving to the area that I had left off the previous week.

I am fortunate enough to live in Southern California about 30 minutes from the road so the first part of the endeavor is not too difficult for me.  As I get further along though...I will probably take the train to the starting and stopping points.

This part of my story finds me as I make my approach from the west into the town of Upland.

It's a clear and warm late Sunday morning and the San Gabriel Mountains are now my traveling partners on my left side.

Signs of life of the town of Upland start to crop up as I start seeing some remnants of the old road from it's heyday.

I am starving from hiking the entire morning and I start looking for a place to eat.  My first inclination is to eat a Buffalo Burger at the Iconic Buffalo Inn.

The Buffalo Inn was first established along the road during the Prohibition Era in 1929 and was actually a watering hole for famous people as they traveled the road.   Then it went through a series of name changes and mismanagement.  The current owners took it over in the 1970's and restored the original name.

The cool thing is that the Buffalo Inn basically looks the same as it did over 80 years ago.  The bougainvilias are overgrown on the patio and provides a great natural shade which makes for pleasurable outdoor dining experience.  This day a rock band is playing and the parking lot is full.

As I said, that was my first choice of a place to eat but then I caught a whiff of their neighbor's barbecue.

The Texas-style Joey's Barbecue has been at it's location on the Mother Road since the late 1970's and this is where I chose to eat this day.

Joey's is clean with hardwood floors and the walls are lined with Western and Movie memorabilia.  Old Country music plays in the patio and in the bar area.  A gentleman plays and sings traditional Mexican songs in the corner of the dining room.  I can see Route 66 from my table.

Maybe because I was famished from walking, but the food was really good and hit the spot.  I had a half chicken and pork ribs smothered with Joey's delicious tangy barbecue sauce with a side of potato salad and slaw.  I followed that with a delicious Hot Brownie topped with Ice Cream.

I found the portions of food to be plenty at a very reasonable price.

After letting my food settle I was back walking the road. Most of Upland along Route 66 has now become a series of one strip mall after another sprinkled in with some new housing developments.  But they seem to be proud of the Route 66 culture as there are a lot of signs reminding you that you are indeed on the Mother Road.  Classic cars cruise past me on the road too which adds to a nostalgic feel.

There is an interesting McDonalds on the corner of Benson and Route 66 (Foothill Blvd.).  The fast food restaurant has been turned into what is called a "Classic McDonalds" which is reminiscent of the drive throughs in the prime of Route 66.  I step into the Diner and it is like I had dropped into a time warp because this McDonalds is exactly the way I remembered it from my childhood.  This is even though it was done retro style and is not actually the original like what I will see when I get to San Bernardino.

I reach Euclid Street and see the famous Madonna of the Trail statue.  This is one of seven along the Old Spanish Trail that would greet travelers. I decide at this point to make a diversion off the Mother Road and I head down the beautiful and shady tree lined Euclid Street to Ninth street and Old Town Upland.  The area looks very much like it did in a bygone era save for the fact that there are no Trolleys that runs down the middle of the road anymore.

Historic Old Town Upland is filled these days with Antique Stores and Retro Diners.  I take in an Antique Auction and then head back to Route 66.

Once back on Route 66, I walk past more strip malls, fast food joints, banks and gas stations along the road.  I find an old Liquor Store from an older era and a beautiful public park which includes a small baseball park. As I head out of Upland I can hear a baseball game being played in a distance just off the road.

Next Chapter: I reach Rancho Cucamonga.