On The Cover of The Rolling Stone 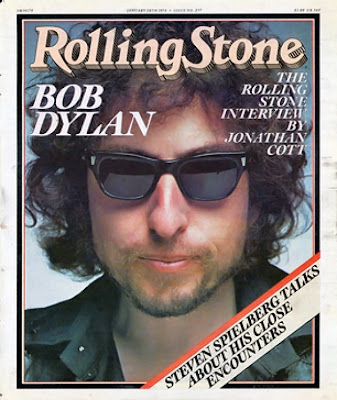 Once upon a time, Rolling Stone used to be a cool magazine.

When I was a kid, I would read every issue cover to cover. They had great articles and interviews with rock stars, album reviews, concert news and told you what the top songs were in different categories.

And they had some very interesting and great magazine covers capturing iconic Pop Culture figures from Bob Dylan to Jim Morrison to John Lennon to the first cast of Saturday Night Live.  Taken by great photographers like Annie Leibowitz.

If your picture made it on the cover of the Rolling Stone you knew you had arrived.

There was even a popular song in the 70's by Doctor Hook which went something like this. (Everybody sing along)

That cover of that magazine was always reserved for Pop Culture and Coolness.

But what Rolling Stone magazine did this week was not cool.

I know they are hiding behind the Freedom of Expression thing.  But there is also this thing called common sense.

Since when is it a cool thing to put a killer and terrorist on a front cover of a major magazine discussing pop culture and make him look cool like a young Bob Dylan or Jim Morrison?

If it inspires just one young person to think it's cool to be a terrorist and killer and they follow through, then Rolling Stone you will have blood on your hands.

And it's not like Rolling Stone doesn't know what they are doing.  They've been doing this gigue for over forty years years now.

By this time, they have even figured out how to do a guerrilla sales campaign.  In other words, you put out a controversial story with a controversial cover and then look at the number of people on social media and other publications that plaster it all over their sites.

You can't buy that type of publicity.  Even bad publicity is ....well you know.

It's calculated.  They probably knew that they were going to lose sales and stores were going to yank it off the shelves in New England, but they also knew would make up for it in other areas. It's flat out immoral and sickens me.

I really don't want to hear the argument that print sales are losing out to the internet either and Print Publications have to do drastic stunts like this to capture sales.  That is not what this should be about.

Even if the article (yes there was actually an article to go with the cover) is well written and follows journalistic standards, freedom of speech and expression doesn't mean that you use it to yell "Fire" in a crowded theater when there is none.

We should not be giving a sentence, a word or "rock star status" to these people that commit heinous atrocities against other human beings.  They should not get their five minutes of fame and inspire others to do the same thing.

Shame on you Rolling Stone.