I Want Off the Monopoly Express 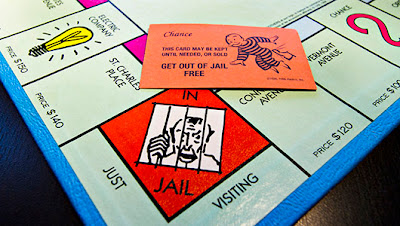 When I was a kid we used to play a lot of  board games and do other activities and to me, the longer the games went, the more interesting and fun it got.

It was like a badge of honor to see how long the game could go.

For instance, if you walked into our house you might see a Monopoly game left set up in mid-game.

"Yep, we've been at it for about five weeks now", I would puff my chest out and pronounce proudly.

Board games were interesting, because the longer you left the game the more interesting it got which added a different dimension to the game.

As an example we would leave games of Battleship unattended for long periods of time as we were playing.  Then ships would mysteriously disappear from the board.

The finger pointing and accusations of cheating would inevitably insue.  Later on we would find chewed up pieces of battleships under the bed.  The culprit turned out to be the family dog Sarge.

By the way, I think Sarge knew what he was doing and favored my brother as he always took off the board the pieces that would best help his favorite person in the family win the game.

When my brother and I would play with our Matchbox toy cars in the backyard, it wasn't a thirty minute thing.  Oh no. That wouldn't be any fun.

Transforming our backyard into a miniature Serenghetti, we would make this winding miniature dirt track and roads around the entire back yard (which would take several hours by itself to build) and then we would launch into something, complete with commentary,  which we could call the Jeepster Off Road Race with 30 of our Matchbox cars, especially the ones that looked like offroad vehicles.

The 24 Hours of Lemans or the Iditarod had nothing on our fictional race.  This was a two week event that would go 24 hours a day.  You would see us out at 10 PM at night with the back porch light on in the Southern California Summer doing our race and advancing the cars.

Then there was the mother of all slow games.  Two Words:  Correspondence Chess.

Chess is a long enough game as it is.  But when I was a kid, before the internet, aps and email you could play Chess through the good old fashioned snail mail with somebody across the country.  You would mail your individual chess moves one move, one letter or postcard at a time.  Things sped up with the invention of the zip code mind you, but those Chess Games could go on for months or years even.

You may be wondering why I am bringing this all up.

This is because I heard an interesting story this week on how game maker Hasbro was speeding up traditional board games like Monopoly and calling it Express Monopoly.  Now, through the magic of modern technology, the game Monopoly can be played in less than 30 Minutes.

Are you kidding me? Is nothing sacred?

First the sit down family dinner with everybody present mysteriously went away and now this?  Game night is supposed to be enjoyable, relaxing,  and good fun.  It should not be "Beat The Clock".

Besides that, this is nothing new.  We had ways of speeding up a game of Monopoly if we really wanted to.

We would just make my friend Brent the Banker.

Brent had a penchant, I call it a skill, for not giving you enough money back or taking more money from you than he was supposed to and you wouldn't even have a clue.  Which kind of prepared me for dealing with Bank of America when I grew up...But I digress.

This action alone would speed up the game and before you knew it the game was over.

Then Brent would just make up rules as he went along which I found out later were not in the official Monopoly rules book.  All this would definitely speed the game up too.

But we didn't care...he was a hoot.  If he landed on your property with a hotel on it, he would do stuff like peel off and fling fake 100 dollar bills at you with a loud "Mere Pocket Change!!!".

I guess my point is, if you are playing Express Monopoly, you are missing out on all of these great moments and lessons about human behavior.

Anyway, that's my story for today.

I have to go now...I need to go to the Post Office to mail off my next move of Correspondence Chess to my friend back East.