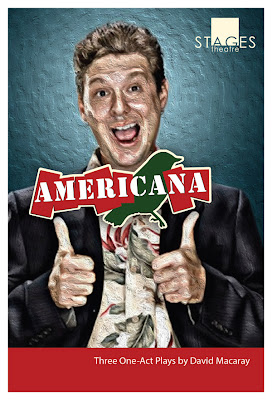 
At STAGEStheatre in Fullerton, CA earlier this year, many took part in a quick survey the small theater provided, and there was an overwhelming request to see more original (unpublished) plays.

The Trio of plays fall under the umbrella title Americana.

In The French Club, when a married couple drops by a car lot to check out the latest models, they encounter a salesman who turns out to be part-psychologist, part-sociologist, and part-con man.

Despite keeping their guard up, they soon find themselves players in a bizarre psycho-drama, ending in seduction, betrayal and, perhaps, the purchase of a brand new, fully loaded XL-70.

In No Salesman Will Call,  a woman who takes great pride in her sales resistance (but also happens to be a helpless buyer of consumer junk) answers a knock at her door. It’s a salesman. She hates salesmen, and she hates predatory sales techniques, but, paradoxically, she loves buying stuff.

Alas, our economy would collapse without people like her.

In Nature a college professor with “women problems” meets an almost totally uninhibited young woman in a park. Despite being polar opposites, they manage to more or less hit it off. Meanwhile, in a nearby tree, a mother bird frantically fights to keep marauding crows from killing her babies.

Show times for Americana are Saturdays and Sundays at 5 PM.

STAGESTheater is located at 400 E. Commonwealth in Downtown Fullerton, CA (between Lemon and Balcom).

For reservations, go to www.stagesoc.org