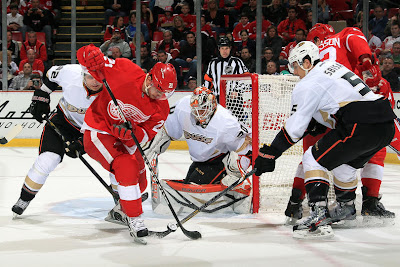 They say that the most exciting sports event is the National Hockey League Postseason or Stanley Cup Tournament.

After the first week of action in the 2013 Postseason,  it would be hard to argue with that statement.  That's because unlike any other sport with a clock, if the game is tied after regulation time expires, the NHL Hockey Playoff Games continue until somebody scores.

I've witnessed games go into 1 AM or 2 AM before somebody scores a goal.

At that point, it becomes a game of survival of the fittest.

In the first night alone of the NHL Playoffs this year two games went into "sudden death" overtime and the other two were decided by one goal.

But for this West Coast Hockey Fan from the once Hockey deprived state of California something happened that has never happened before.  All three of the State's teams: The San Jose Sharks, Los Angeles Kings, and Anaheim Ducks made the playoffs together for the first time in one season.

As of this writing the Sharks have a commanding 3-0 lead in their series, the Ducks lead theirs 2-1 and the Kings, the defending Champs came back to halve their series deficit to 2-1 on Saturday night.  Assuming all three of these teams can survive the first round, two of them will have to face each other in the Second Round assuring that at least one representative from California will be in the Western Conference Finals or maybe even two.

Another interesting thing happened this season as well.  For the first time in a long time, the "Original 6" NHL teams are in the playoffs together.

The Original 6 teams, for those of you keeping score are: Chicago, New York, Boston, Toronto, Montreal, and Detroit.  The name of "The Original 6" is a bit of a misnomer because there were other teams that were in the NHL before these teams but from 1942-1967 they were the only teams playing.

Also, the Ottawa Senators made it.  The Ottawa Senators would be part of an original seven because they were around in the earliest of days of the NHL but were out of business before 1942 and for a long time after that.  The current team is actually the third incarnation of a team from Ottawa with the name Senators.  The Senators are kind of like the Washington Senators Baseball team of Hockey.

And this year is the year of the return of the Canada teams to the post season.  It used to be Canada ruled the roost in the NHL for years but recently the teams in the USA outnumbered the Canadians in the Post Season.  In addition to the three Canadian teams mentioned above, Vancouver also skated in from the West.

And it's hard to believe, that just a few months ago that the NHL was involved in a lockout that almost wiped out the entire season.

When it finally did return the question on a lot of people's mind was how would the fans react.  Would they stay away like they did after the last strike and boycott the league?

The answer was a resounding no.

The NHL did something interesting after the strike that was a bit of a throwback.  To make up for lost time they played a lot of games in a short period of time and they eliminated all Western Conference vs. Eastern Conference match ups in the shortened season.

So just like the good old days of Major League Baseball and the NFL  there was no inter conference or inter league games.  The first time you will see a East - West matchup in the NHL this season is in the Stanley Cup Finals.

Getting back to the NHL in California, it's hard to believe that we actually have three teams in this state.  I am old enough to remember a time we had one team, well two if you count the short-lived California Golden Seals but they were not that good and the Kings rarely made the playoffs in the early days.

Two events put California on the map Hockey wise in my opinion.  One was when LA Kings owner Bruce McNall brought the legendary Wayne Gretzky to the Kings in the early 1990's.  The other was the perfecting of the inline skate.

Up until then, if you were a kid growing up in Southern California and you wanted to play Hockey, rink time was nearly impossible or too cost prohibitive and of course there was no ice on the ground in this region.

But the inline skate, and the fact it closely simulated the ice skate and there is miles of concrete and asphalt to skate on was a game changer.  As the popularity of Hockey grew, with everybody embracing   "The Great Gretzky" and the Los Angeles Kings and the newly formed San Jose Sharks and Anaheim Mighty Ducks the game took off and more Ice Rinks were built.

Tonight is going to be exciting for this Hockey Fan...The Ducks play at 5 and the Kings at 7.  A Southern California Hockey Playoff Double Header.