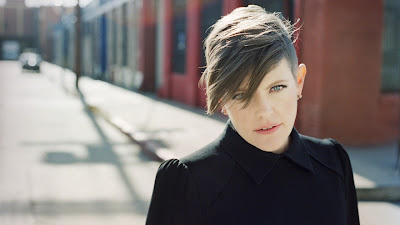 A few things came to mind after I finished listening to Natalie Maines first Solo album away from the Dixie Chicks.

First of all, it's been ten years since her infamous "I am ashamed of our President" comments over George W. Bush's decision to send our troops into Iraq which led pretty much to her ban on Country Radio.  (Feuding with Toby Keith probably didn't help that either).

Was it a coincidence, that this album is released just little over a week removed from the opening of the George W. Bush Library in her/his home state of Texas?

Again, Our Ex-President George W. Bush was peppered with questions about that decision and there is even an exhibit at the newly minted Library letting you "make the call" based on the facts that were presented at the time.

Or maybe, the album, entitled Mother,  is coming out less than a week before Mother's Day.  That could be it too.

Second of all, on the music front,  I couldn't help think about another female musical artist in the 70's that made the transition from Country Rock/Folk into Rock as a solo artist.  That artist, one Miss Linda Ronstadt, made a series of "Cover Albums" too in the rock genre that did extremely well.

Natalie Maines does this here on Mother (Released on Tuesday) with a well-crafted album covering songs from Eddie Vedder, Patty Griffin, Roger Waters (Pink Floyd), and Ben Harper to name a few.

But Maines has an added dimension that Ronstadt didn't have and that is her wonderful song-writing ablity.  There is only one of her original songs, "Take It on Faith",  here in addition to the covers but I would argue it is the strongest on the album and leaves us wanting a follow up album of all-original material.

Natalie Maines always seemed to be suited for Rock and Roll anyway.  Think about it.

She has never hesitated to share her progressive views about politics and pop music. And then there were those outspoken comments against the President or her fighting for the release of the West Memphis Three or her famous feud with Country Artist Toby Keith.  She's a little bit rebellious.

Ben Harper, who's also made a career outside the usual pop categories, co-produced Mother and his usual cast of characters worked on the sessions for this album, making this a well textured album from a  musical standpoint.

The versatility of these seasoned players allows Maines to explore the full range of her singing abilities.

She strips it down in Vedder's ballad "Without You," and runs cool in "Free Life" (Dan Wilson)

She is in familiar area (from her Dixie Chicks days) with her rendition of The Jayhawks' "I'd Run Away" as well as Tom Petty's "Come Cryin' to Me" .

On Jeff Buckley's "Lover, You Should've Come Over," Maines not only hits  the notes which is not an easy thing to do on that particular son; she completely owns it.

This promises to be a busy year for Maines, who in addition to this release will be re-uniting with the Dixie Chicks in the summer at a series of music festivals in Canada.

It will be interesting to see how the Public will receive her now.

Musically speaking, controversies aside, her first solo album is a joy to listen to...one of the best of the year so far.