I Could Use A Billiken About Now 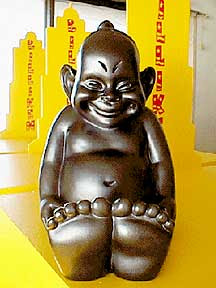 For somebody who had not flown for 27 years, I did a lot of flying recently. I had to. I was working on a project in Northern Alaska and taking a sled of dogs or a snowmobile across the frozen tundra was out of the question. But that's just me. I figure I will have sixteen landings and takeoffs in a year period when all is said and done.

The reason why it took me over a quarter of a century to get enough courage to go back in the air is because the previous time I had flown in 1981 I got the fright of my life.

Hal Flemings and I were coming back to Southern Califonia from a business trip in Atlanta when as we started our descent into LA we experienced some horrible turbulence. The rocking motion made me sick. I swear to this day as we came out of the clouds it appeared as if the plane was (as my friend the late Bill Keane would say on KNX Newsradio) "Catty-Wampus to the world". It seemed I was looking straght out the window to the pavement below.

For 27 years I stayed out of the air. I took a lot of trains, buses, automobiles, hikes...anyway to get to my destination except flying until I absolutely had to use a plane.

So recently I spent some time at the Long Beach Skyharbor Salt Lake Seatac Anchorage Airport. It just felt like one huge airport.

Long Beach is a great airport for flying out of. It seems to be the best kept secret. The rates are typically lower and it has the best place to hangout or sleep while you are waiting for a plane. It also has free wi-fi and the signal is very robust.

As I was waiting I got caught up on the history of the airport. Long Beach Airport is also called Daugherty Field. Earl Daugherty was a great aviator but he crashed his plane and died while he was quite young. Which made me wonder why the marketing department at this airport would name it after somebody who crashed a plane.

The other thing I found out was that Daugherty would always have a Billiken with him when he flew. This was for good luck. A Billiken is an Asian symbol of good luck. Kind of like a troll doll but slightly more handsome. One day Earl Daugherty did not have his Billiken with him. That's the day his plane crashed. I immediately started looking through the gift store for a Billiken but I couldn't find one.

I think the biggest thing between flying in the 70's and 80's compared to today are the airports. They're like huge malls...without the sales. They don't have sales in the airport. The stores and restaurants have you captive and they know it.

About the bag fees...This has not been an issue for me. I got my bags down to two carry-ons. I know it's easy for me because I pack light anyway and it's easier to do that in the warm months. But avoid those bag charges by going as light as possible. That was an extra fee I didn't want.

Before I end this article...I have to say something about TSA. These folks are being diligent and doing a good job in my opinion. In many cases they try to make you feel as comfortable with the process as possible. But they are thourough and are taking the job seriously. They have actually improved since I first saw them. I know it's a cliche but I rather be safe than sorry.