42 Captures The Essence of Jackie Robinson 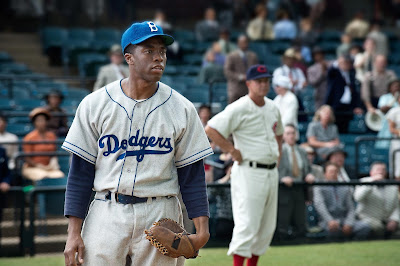 Jackie Roosevelt Robinson compacted so much living into his short 53 years on the planet and accomplished so many things that it must have been extremely hard to narrow his life story into a two hour film.

But the movie 42 does just that by choosing purposely to focus on two years of his life (1946-47)...the part where he broke the Color Barrier in Major League Baseball.

This film, written and directed beautifully by Brian Helgeland (LA Confidential, Mystic River)  is wonderful on many different levels.

First of all, you are graphically and cinematically forced to walk a mile in Robinson's cletes and understand how extremely difficult it must have been to put up with the abuse from the crowds and the all white fraternity known as Major League Baseball in the 1940's.  And have the ability and restraint to not retalliate.

Most of us have read the stories on how Robinson was racially taunted from opposing managers, teams, people he encountered while traveling with his team,  and fans.  But to see that on the big screen and actually feel it, albeit on a minor level than he did, is an eye opener and heart wrenching.

Secondly, the movie works as a beautiful love story between Rachel and Jackie Robinson.  Rachel, who would go on to professional successes of her own and instrumental in maintaining the Jackie Robinson legacy, is portrayed here by relative newcomer Nicole Beharie (The Good Wife, American Violet).

As a baseball fan and fan of the history of the game, this movie is just flat out mesmerizing.

Through the direction of Helgeland and the set design and wonderful cinematography of Don Burgess (Forest Gump, Spider-Man) you are magically transported into the world of 1940's baseball.

1947 Ebbet's Field in Brooklyn, Crosley Field in Cincinnatti, Forbes Field in Pittsburgh and Shibe Park in Philadelphia are re-created faithfully and when you see them on the big screen it's as if you can smell the peanuts, cracker jacks, hot dogs and cigar smoke.  It's like you are actually there.

Red Barber, the iconic Brooklyn Dodger Hall of Fame announcer and mentor and predecessor of the great Vin Scully is played and voiced wonderfully by John C. McGinley (Scrubs, Platoon) .

Harrison Ford's Cigar-chomping Branch Rickey will no doubt earn him Academy Award consideration.  An accurate portrayal of the man who was instrumental in MLB's breaking of the color barrier.

And in retrospect, it was probably a stroke of genius to cast relative newcomer Chadwick Boseman (who to this point has been seen mostly seen in TV episodes like Castle and Law and Order) in the lead role.  The focus here stays on Jackie Robinson and not so much the actor.  But that being said, Boseman also needs to be considered for an Oscar for his portrayal of Jackie Robinson.  He is destined for greatness.

Boseman is destined for greatness on the big screen.  I foresee a replay of what happened with Denzel Washington when he made that leap from Episodic Television to the Big Screen.

The only drawback for me was that the movie, clocking in at just over two hours, went way too fast.  I wanted to see more.

For instance, as a Southern Californian, I wanted to see more about his early years as a four sport letterman at UCLA and Pasadena City College (which will probably never happen again) and the fact that he was part of the most integrated team in College Football at the time...The UCLA Bruins.

Maybe A Sequel or A Prequel?