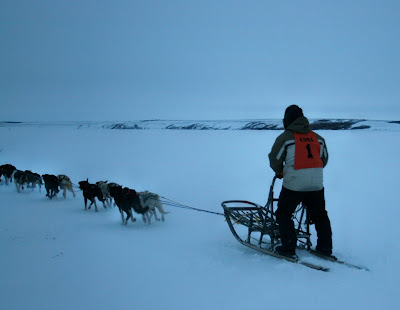 A musher and his team takes off across the frozen Bering Strait in Kotzebue, Alaska in a race in December. This race was a prelim for the Iditarod in Anchorage, AK.

Story and Photo By Allen Bacon, The Daily Bosco

The Iditarod Dog Sled race from Anchorage to Nome, Alaska starts on Saturday.

When it comes to the Annual Iditarod, the subject of many documentary and fictional films, no town can claim to the title of Mushers Town as much as Kotzebue, Alaska. This year five men and their teams of 14-16 husky mix dogs each will make the trip from their hometown of Kotzebue to compete in the Iditarod.

For the uninitiated the Iditarod is an annual race between men and women and teams of 14-16 dogs and sleds across the frozen tundra of Alaska from the town of Anchorage to Nome. It recreates an old medicine run that would take much needed supplies to the people in isolated areas.

The race typically takes approximately ten days. It’s a test of wills, animals, and knowledge of the environment…the only stops to feed and rest the dogs and humans while not spending too much time so as to stay in contention.

When you first get off the plane in Kotzebue, you know that you are in Dog Mushing country. First of all, the high school mascot is the Husky which is on a billboard greeting visitors. And the other give away is John Baker's (the 2011 Iditarod Champion) home and the Baker backyard visible from the airport. Because in John Baker's snow covered backyard are approximately 50-60 husky-mix dogs each with their own doghouse.

If you are there in the early morning or late afternoon you may see John or his brother Andy hitching up a team for a run.

For the people who think that dog mushing is somehow abusive to the dogs, you need to spend a few days in Kotzebue with the mushers. These dogs want to run.

It seemed like everytime the Bakers or other mushers would hitch the teams up the other dogs were chomping at the bit. They wanted to run too.

These dogs, usually a husky and hound mix, are kept with the musher's family from birth until death. Even though the optimum age for running the Iditarod is three, the dogs will stay with the families for their entire life.

Out of the individuals competing from Alaska this year, the dean of this group is John Baker, a 50 year old Mountain of a man, a gentle man who will be running in his 17th Iditarod. John Baker was born to run this race and he typically finishes in the top five. Two years ago he won it for the first time.

He is the Dale Earnhardt, Michael Jordan, Mario Andretti, and Willie Shoemaker of his sport.

"We are competitors, make no mistake about it", says Baker, "but we are also friends so we help each other out when we can."

For the Bakers, it's a family effort. John acknowledges that there is nobody that knows more about the sport of dog mushing than his sister Sue. Sue, who now lives in Fairbanks, organizes everything from travel arrangements for John and the dogs to feeding the dog and human team.

Iditarod 2013 Notes: Follow the race in real time and learn more about the Iditarod race and the wonderful animals in the race by going to this link at iditarod.com