Preseason Baseball Is Back 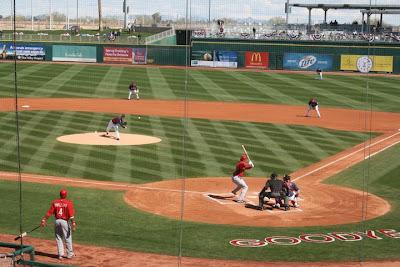 I am a huge baseball fan and as long as I can remember, I have always wanted to see Major league baseball Spring Training games in either Florida or Arizona. I just never got around to it until recently.

With Preseason Baseball starting up in Arizona and Florida this week, I wanted to share with you my trip to the Arizona spring training site last season. Just in case you want to go.

But remember kids, this is not for the faint of heart...in other words, don't try this at home.

Of course, if you have been a frequent reader of the Daily Bosco over the past four and a half years you know I almost never do anything normal.

Most normal people, when they go to spring training are interested in seeing their favorite team and going to one or two games with their team and taking it easy...hang out around one of the finer Phoenix area hotels by the pool and sip their favorite beverage. Not me.

A long time ago, I hatched this idea that I would see parts of all games at all venues in one day.

The original plan was, since I was going to be in Atlanta during the start of Spring Training that I would slip over to Florida and see all the games in Florida (The Grapefruit League) that one day and on my way back from Atlanta, jump off in Phoenix and go to parts of all the games in one day in Arizona (The Cactus league), and take the Southwest Chief Amtrak back home to Fullerton, CA.

I never made it to Florida so the next idea was on the way back from Atlanta to fly into Phoenix Sky Harbor and hike and bus around to all the Spring Training Sites. Then I started looking at the logistics of that and figured I would only get to two games, at the most in one day...if I was lucky, if I did it that way.

At the last minute I decided to drive to the Phoenix area from my home in Southern California.

I left from my home early on the first Sunday of the Cactus League season, the last day of February, around 6 AM PT.

There were six games in six locations on opening day. I realized that there was a road that looped around the greater Phoenix/Glendale area and if I did it just right I could possibly hit parts of all six games plus the Arizona State baseball game that day.

Now, let me tell you...I had heard stories that I must buy tickets in advance to the games and it was very hard to get in, so of course, I didn't do that.

That wouldn't be any fun.

I was fully expecting to pay for all of my tickets and parking and food..but I got this idea on the drive to Arizona that I would see if I could get away not paying anything except my fuel and food.

First of all, before I get to the story, let me tell you about the roads.

I got on Interstate Ten and I quickly discovered how bad the roads in California have gotten. Forget High Speed Rail...spend a fraction of that money and fix the roads for crying out loud. Plus all the rest stops are in horrible condition or boarded up and closed.

I listened to Casey Kasem's America Top 40 for 1972 on an Inland Empire Oldies Station on the way out only stopping in Blythe at a McDonalds for Egg McMuffins and Coffee before crossing the Arizona Border.

You know that part in the Wizard of Oz where it starts out in black and white and then there is the part after Dorothy's house crashes into Munchkin land and she steps out of the house and sees Oz for the first time and it is all in color and beautiful? Well crossing the border into Arizona was sort of like that.

The roads all of a sudden became smooth and I could of sworn it was made of gold...or it seemed that way. And they have the best rest stops in the country. These rest stops could be in Architectural Digest and I wouldn't be the least bit surprised.

I picked up the Phoenix Suns game somewhere in the Arizona Desert and listened all the way in to the Valley of the Sun.

I reached my first stop in Goodyear, AZ around 12:30 AST for the game between the Reds and the Indians. I asked two of the ushers and a person at the ticket window if I could just go in and take photos of the game and leave and they said that I had to buy a ticket. So as I was pulling out my money to purchase an $8 berm ticket, a lady approached me and said that she had overheard me and said she had just dropped off a ticket at will call and I could have it. I bought her a Coke and spent $3.00. I parked off site and walked in so I didn't have to pay for parking.

It was a beautiful day. Low Seventies and a slight breeze. Goodyear's park had just opened up and it was a very nice ballpark with great sitelines. They had a full house and it definitely had an Ohio feel to it with the two teams playing there. For the game I wore my Red Fullerton Indians Cap. Get it? It was a combo Red color with an Indian feather on the back. I thought it was appropriate anyway.

I watched an inning from my seat on the third base side, got a Ken Griffey Sr. autograph (he was sitting in the foyer watching), and moved over to the first base side where I had one of the nice ushers take my photo with the field behind me.

Goodyear Park: Five Scoops of Bosco (out of five)

I arrived at my next destination at Camelback Park in Glendale around the third inning. On the drive I tuned into the Diamondbacks-Giants game from Talking Sticks and the Arizona State Sun Devils vs. The Holy Sisters of Mercy Junior College (or some team Arizona State was beating up large) from Tempe. I also snapped a photo of the University of Phoenix Football Stadium where the Cardinal play on the way over. That is an amazing structure.

My beloved Los Angeles of Anaheim-Disneyland Adjacent Angels (my home county and favorite team) were playing the Dodgers and it was not looking good for my team. We were down 3-0 in the third. I threw on my Red Angels Jacket and a Red hat to support my team. There was free parking here so I didn't have to pay for that.

This is one of the older ballparks in the area and is the home of both the Dodgers and the Chicago White Sox.

The Dodgers, who started playing in Arizona for Spring Training the previous season are using this facility until they can finish completing their own. I met an older lady at the ticket window who graciously escorted me into the park and allowed me to take pictures and watch one inning of the game.

The park was full with mainly Dodger Blue filling the seats.

For those keeping score at home: two ballparks down $3.00 total spent.

Out of all of the places I went on this day I was most, pardon the pun, Surprised, by the Ballpark in Surprise, AZ.

This is another new facility and is the spring home of the Rangers and the Royals and they were playing each other this day. Wow, a team from Missouri against the Rangers. Little did I know that this was obliquely a forecaster of the fall classic coming up where the Rangers would lose to St. Louis.

I loved the atmosphere, the design of the ballpark and the attitude of the staff at this park. The people of Surprise really get behind this facility and take pride of ownership. Since it was late in the game, the staff let me in without a ticket and the parking was free.

Out of all of the games, I thought that this one would be a no brainer to get in for free. The game is in the last inning, it's a blowout, and it's spring training. But no...I had to pay $6 for a Berm seat to watch a game in Peoria. But it turned out to be interesting.

The Padres scrapped back and took the game to extras. I also sat next to the wife of the Public Information Director of the Mariners who took my photo and shared with me what the plans were for the upcoming season.

Peoria is one of the older facilities and is shared by the Mariners and Padres.

So, I ran out of time to see all seven games that day. The game at the great new and large facility Talking Sticks (this could be a major league ballpark for the Diamondbacks if Chase Ballpark collapses) between the Diamondbacks and Giants was over as was the Cubs Game in Mesa and the Arizona State game in Tempe. So, I went over to a great art show in Scottsdale, grabbed some Subway on the way out of town and tuned in to listen to the Phoenix Coyotes hockey game. I was back in So Cal at 11 PM PT that night.

I didn't get to all the venues I wanted to...but that's ok.

That will give me a reason to go back this season. This is after I go to Florida for the Grapefruit League and up to New England to watch the Cape Cod League in the Summer.