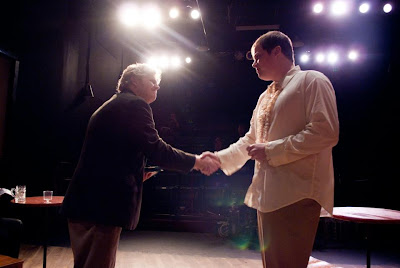 I have always been fascinated by plays, television, and movies that place two or more geniuses, often from different generations, together in the same place for conversation, discussion and debate.

For instance, I remember this extremely creative television show on PBS, created, produced and hosted by the late Steve Allen, called Meeting of the Minds which was constructed in a typical talk show format, featuring guests who played important roles in history. Among those who appeared were Plato, Socrates, Aristotle, Thomas Aquinas, Queen Cleopatra of Egypt, Marie Antoinette, Florence Nightingale, Thomas Paine, Francis Bacon, Thomas Jefferson, Voltaire and Charles Darwin.

So that is why when I heard the premise of Steve Martin's play "Picasso at the Lapin Agile", I just had to see it.

This play places Albert Einstein and Pablo Picasso in a cafe in Paris in 1904, just before Eistein transforms physics with his theory of relativity and Picasso goes into his Cubism phase of his art career.

And how appropriate that Martin's first play is performed in North Orange County, CA this month where he got his start back in the 1960's. It was a High School-Age Martin that started his long career by performing at nearby Knott's Berry Farm's Bird Cage Theater as well as playing Banjo and performing at Disneyland's Horse Shoe Review in Frontierland. Fullerton's Stages Theater is a short walk to both of those venues. As the gentleman that sat next to me at the play so aptly put it... "He (Martin) is one of Orange County's Finest Treasures".

While I was fascinated by what the interaction between a young Einstein (played brilliantly by Greg Spradlin) and a young Picasso (played equally well by Topher Mauerhan) would be...as the play developed I actually was very intrigued by the other characters especially Freddy (Mark Coyan) and Germaine (Katie Chidester). These two characters are saying things of geniuses as well. Which begs the question, What makes one person famous for being genius like Einstein and Picasso, but other people not so much? If a tree falls in the forest...

Playwright Martin also interjects a third genius into the mix at the end of the play which totally took me by surprise. I won't give away who "The Visitor" is but it brings the play full circle and is played wonderfully by David Pittman.

If you are a fan of Steve Martin's quick, absurd and frenetic approach to comedy you can hear it channeled here. I was very much reminded of the material he wrote for Saturday Night Live in the 70's like the "Theodore, Barber of York" skits. Martin is a well-read and loves to collect art too and that all shines through in this play.

The Fullerton Stages Theater production of Picasso At The Lapin Agile runs until April 8.