Iditarod: Team Baker Brings Championship Back To An Alaskan Village For First Time Since 1976 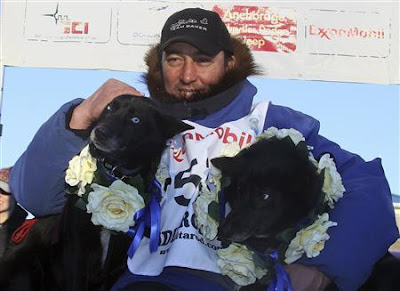 Editors Note: Our friend John Baker from Kotzebue, Alaska won the Iditarod Classic in record time on Tues. March 15 to become the first Alaskan native since 1976 to win the race. Congratulations to John, his wonderful team of dogs, his family, and the towns people of Kotzebue who have waited a long time for this moment. Two accounts below from first Yereth Rosen and then one last story from a guy that has been our eyes and ears throughout the entire race this week, Bruce Lee from Iditarod.com . .

He shattered the course record by three hours, finishing the 1,100-mile race in eight days, 19 hours and 46 minutes. The previous record had been set in 2002 by four-time champion Martin Buser.

Driving a team of 10 trotting dogs, Baker sledded along snow-covered Front Street in Nome, Alaska, as he approached the finish line marked by a polished, knotted wood arch.

He was greeted by drummers and dancers from his Inupiat tribe, and a large crowd of relatives and supporters from his home town of Kotzebue, located about 180 miles north of Nome.

"Running a team like this, there's nothing better," Baker, 48, said at the finish line. "This is the way life is supposed to be."

The Iditarod commemorates a 1925 rescue mission that sent diphtheria serum to Nome by sled-dog relay.

Aside from being the first Alaska Native to win the race since 1976, Baker is the event's first Inupiat victor.

The Inupiat are the Eskimo people of Alaska's northern and northwestern coast. Their language is distinct from that of the Yupik people, who are from the more southern parts of western Alaska, and they have common traditions based on whaling and other subsistence food-gathering traditions.

Among those celebrating Baker's win was Denise Michels, the first Inupiat to be elected mayor of Nome.

"I've waited eight years to tell you this," she said, after hugging Baker. "On behalf of the city of Nome, congratulations on coming to the burled arch first."

At the finish line, where Baker received an oversized check for $50,400, keys to a new truck and flower wreaths for his lead dogs, the new champion said he did not realize he was on a record pace until the final hours of the race.

Baker is a commercial pilot who flies small planes between rural villages in northwestern Alaska, an area that lacks road links. His home of Kotzebue, a mostly Inupiat town of about 3,200, lies above the Arctic Circle.

Baker is one of the few Iditarod champions who lives in a truly rural part of the state. Most top mushers reside along the road system north of Anchorage or in the Fairbanks area, with easy access to supplies, business partners and corporate sponsors.

He has been a consistent top-10 finisher over the past several years and placed as high as third in previous races.

Past Native Iditarod champions have been Athabascan Indians from interior Alaska.

The latest Iditarod competition began on March 5 with a ceremonial run in Anchorage. Sixty-two mushers and their dog teams began the race. As of early Tuesday, 11 had dropped out.

And, one more story from Bruce Lee, our eyes and ears of the Iditarod:

John Baker’s record breaking win of Iditarod 39 brings to fulfillment the dream of the individuals that started the Iditarod Sled Dog Race. The goal of Joe Redington Sr., the volunteers and the mushers that successfully pulled off that first Iditarod in 1973 was to bring attention to the important role that sled dogs played in the history of the North and to rekindle the interest of sled dogs in the rural villages of Alaska, where the arrival of the snow machine was slowly causing sled dog kennels to disappear. John Baker who is from the community of Kotzebue on the shore of the Chukchi Sea personifies Redington’s dream of keeping the sled dogs in the villages.

This years Iditarod is historic on a number of levels:

1. John Bakers’ win returned the Iditarod championship to a village in rural Alaska

2. Bakers win ended the 4 year reign of Lance Mackey which is likely to stand in record books forever.

3. John’s record breaking finish of 8 days 18 hours 46 minutes and 39 seconds shatters the previous race record for the fastest time from Anchorage to Nome. This means that not only did John beat every other musher in this years Iditarod but he also beat every musher in every race from Anchorage to Nome both for the Northern and Southern routes. As a footnote, John set this record on the Southern Route which is considered a more difficult trail and a few miles longer.

4. Ramey Smyth, the musher who won second place and chased John up the coast is the son of Bud Smyth who competed in the very first Iditarod. Once again we see the fulfillment of the dream of keeping an interest in sled dogs with the passing of the torch from one generation to the next. Hopefully these two individual’s great performances will inspire young mushers throughout Alaska and the rural villages to keep the interest in sled dogs burning bright.

For his effort John Baker won $50,400 and a new Dodge pickup truck. Ramey Smyth will receive $46,300 for his second place finish.

Fans and mushers reviewing this race will wonder how did John do it? Everything you need to know about sled dog racing you learned in Kindergarten. It’s the story of the tortoise and the hare. Rick Swenson told me years ago that you don’t need a fired up, loping team to win the Iditarod. He said that a dog team that will trot at 7 to 9 miles per hour from start to finish will get you to Nome first. John’s team is a reflection of this philosophy and maintained a steady pace from Anchorage to Nome. If there is one key factor that I observed following John’s team up the trail it would be leaders. Many mushers now have fast, race leaders that can burn up the miles going down the trail. Not many have the old style gee/haw trap line type of leaders that perform in any conditions on simple voice commands. I watched John at numerous checkpoints gee and haw his dog team around obstacles, into parking spots and leave the checkpoint flawlessly. This saves mushers both time and energy in checkpoints and along the trail. John’s team to me reflected the good cross country travel type of team brought to the race by mushers like Joe May when he won the Iditarod in 1980.

But the Iditarod is not over. There are still mushers and lots of dogs moving up the trail. There’s still prize money to be won. We don’t know who will be the rookie of the year or who will be the red lantern winner. From first to last the Iditarod Insider will film the finish of each team. Keep watching and enjoy the conclusion of Iditarod 39 until the last musher reaches Nome.