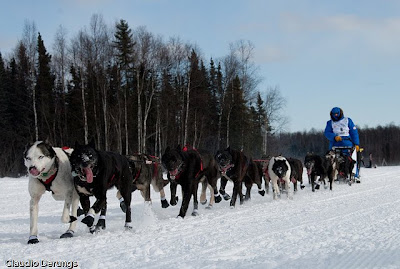 Editor's note: As of 1:36 AM PST, our friend John Baker and his team of dogs from Kotzebue, AK had a 51 minute lead over Ramey Smith as the 11th day of racing approached at the 2011 Iditarod Classic. Only two stops and 77 miles remain before the exciting finish and run to Nome. Here is an eyewitness account from correspondent Bruce Lee at the White Mountain Stop at 10:30 PM AST Time on Monday Night March 14.Follow real time coverage including the exciting run to the finish by clicking on to this link iditarod.com

Both John Baker and Ramey Smyth’s teams looked outstanding when they pulled into White Mountain. John’s ate everything he offered them. Most of them jumped up to eat and a few barked for more meat snacks as he carried his snack bag around. His team obviously has a good attitude and plenty of power.

Fifty one minutes behind John is Ramey Smyth, a musher who has a history of fast finishes in this race. In fact he has won the fastest time from Safety to Nome more than any musher in Iditarod history. In short we still have a race, maybe even right down to Front street in Nome.

With a time difference that’s just short of an hour, it is possible to close this gap on the 77 mile run from here to the finish line. While John’s team looks very capable of pulling off this win, the fact is if you’re standing here in White Mountain Ramey’s team looks strong too and Ramey Smyth is a formidable opponent. He told me that he packed light weight mukluks in his food drop bags, (the equivalent of Alaskan running shoes) and he’ll run all the way to Nome to help his dogs. He also said that he is very proud of the performance his dogs gave him as he came up the coast. He traveled from Unalakleet to White Mountain at an incredibly fast pace and if you know this terrain there are significant climbs through the Blueberry Hills, up over Little McKinley and across the hills on your way to Golovin Bay. Every musher in Alaska knows and respects Ramey Smyth’s athletic capability and will power. He will always give his personal best performance and if he gets you in his sites he will run you down.

The excitement out here on the trail is contagious and everyone is talking about what a nail biter of a race this is coming down to be. Two great teams, two great mushers and 77 miles to go.