Great Heavyweight Fights Of The 70's 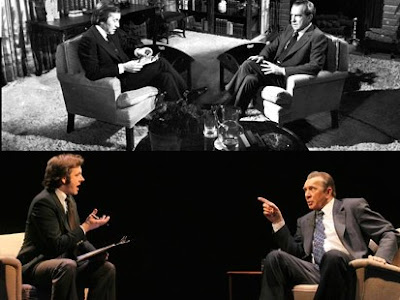 The 1970's were the golden age of boxing. Ali-Frazier, Ali-Bobbick, Ali-Frazier again, Ali-Foreman....Frost-Nixon.

And that's exactly how Frost/Nixon... Peter Morgan's play about the famous television interview series between British talk show host David Frost and former President Richard Nixon, and the movie directed and produced by Ron Howard comes across. A boxing match between two heavyweights.

Think about it...Frost and Nixon each had their corner men. There's the whole Rocky-like preparation sequence. Both had something to prove....Nixon is trying to exonerate himself....Frost is trying to prove that he is more than just a talk show host. The whole interview is in rounds...four to be exact. Nixon delivers the first blow in the first round and knocks Frost to the canvas...can Frost recover?

It's not easy for dialogue to carry a movie or a play. There's only a handful that do it well on film. My Dinner With Andre, Before Sunrise, and it's sequel Before Sunset quickly come to mind. But the dialogue in Frost/Nixon is some of the most compelling in recent years. This fact seems to elude Director Ron Howard who produced this film for about 25 million. And that may be the only flaw of the film version...it's probably over-produced.

The film reunites its original two stars from the London and Broadway productions of the play, Frank Langella as former President of the United States Richard Nixon and Michael Sheen as David Frost. Reportedly, Howard considered bigger names but couldn't get Langella's performance as Nixon out of his head. Langella is Nixon...It's scary.

Excellent performances by Kevin Bacon, Oliver Platt, and Sam Rockwell as the guys behind the scenes of the interview.

Even if you were not around in the 70's and have no historical background on this, this movie is compelling enough to watch.

The Bosco Rating system is based on a score of one to five...five being best