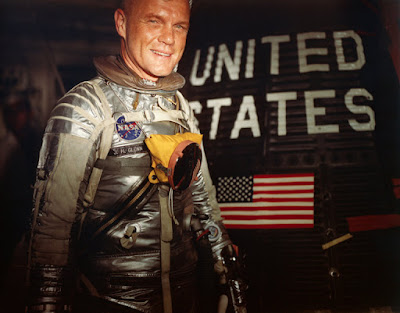 When I was a kid I was absolutely enamored by the space program. I couldn't name the entire starting lineup for the hometown California Angels but I did know the names of all the Mercury, Gemini, and Apollo astronauts.

I had large scrapbooks of newspaper clippings about anything related to my heroes and their amazing rockets and space capsules. I had my own imaginery space program with my brother. We named our own rockets, we sent all of our dogs and our friends dogs into space. (Laddie, my collie, the veteran, went twice), we would do imaginery space walks in my parents living room.

One time, my brother and I saved up our allowance and sent in for one of those cardboard submarines in the back of the comic books. We anxiously awaited for weeks for it's arrival. When we finally received it we turned it into our space capsule. We assembled and placed it in the living room. We were in there for days. Mom would come by every once in awhile and offer her freshly baked chocolate chip cookies and some milk but we were on a mission. "No thanks mom. We have Tang and a tube of food. Besides you can't talk to us unless you have a walkie talkie. We're in space." She played along. She would call us from dad's CB Radio. "Eagle, Eagle. This is Mission Control. Do you read me?"

All these memories came back to me this week when I got the news of the passing of Astronaut  and Senator John Glenn at the age of 95.  Glenn was always at the top of my All-time Heroes List.

He was the one that allowed the little boys in the story above and countless other little boys and girls to dream about space exploration.  More importantly,  Glenn inspired many to actually pick up the baton in the next generations to carry on his work.

Not sure at what point I decided not to be an astronaut. Probably at the same time I really discovered baseball. Then I wanted to be the centerfielder for the California Angels. But the point is my fascination with space travel kind of waned over the years.

I was recently listening to 60 Minutes (linked from Bosco Radio...shameless plug here) and they were updating a story about how NASA and Elon Musk's company Spacex is gearing up to return to space travel, going to Mars and beyond. My reaction was the same one I got when I was a kid. I got really excited and suddenly fascinated all over again.

The thing is though when I was a kid I didn't know the magnitude of the other things that really need our attention. When I travel across this country by rail, along with the natural beauty of much of the United States, I also witness Urban blight and poverty. These are the types of things that need to be addressed first. We have such a huge deficit we, as a country, owe now that it's not even funny.

If there was solid evidence that space exploration would help the national defense then maybe we do this on the nation's taxpayers dime. But if it's just taking an intergallactic roadtrip with a "Because It's There" attitude then lets totally fund this privately with corporate money.

I want the fascination and the spirit of exploration as much of the next person but let's take care of our other problems first or let private industry fund this.