The Death of News Radio in Los Angeles 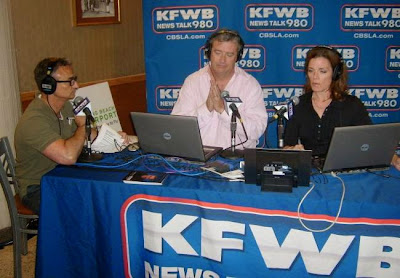 Long before Fox 24 Hour News, CNN was a glimmer in Ted Turner's eyes and the internet had yet to be invented by Al Gore we had two wonderful 24 hour news stations on the radio in the Southern California area.

It has been that way since I was a kid in 1968.  It was a part of the culture of the region.  We took it for granted that we could hop in our car and turn on the radio or turn on the radio in our home or as we are walking or hiking in SoCal and get caught up with what was going on in the world and close to home instantaneously by listening to one of those stations. Or in my case, toggling between both.

This week that will come to an end.  There will only be one news station serving the Los Angeles area as of September 1.

That's because KFWB 980 AM did it's last day of news this past Friday.  At some point next week 980 on the AM dial will become yet another sports talk radio station carrying the CBS Sports Network programming.

Don't get me wrong. I have always liked Jim Rome and Scott Farrell (two of the hosts on CBS Radio Sports), but as anybody knows that lives in the Southern California area we just have too many sports stations on terrestrial radio.  I counted six without even trying.  There may be more.  That's a lot for a region that is kind of casual about our sports teams.

This isn't Chicago, New York or Philadelphia after all.

What we don't have are good old fashioned news stations on terrestrial radio that play it down the middle and report the news straight without a slant.

In it's heyday, KFWB was that station.

They used to have the slogan "Give us 22 Minutes and we'll give you the world".  Why 22 minutes?  Because somebody once figured out that is the average commute for the LA area.

KFWB had these great field reporters.  My favorite was Gary Franklin.

Before Franklin became a popular Movie Reviewer on local LA television (remember the Franklin Scale?) he was an excellent reporter for KFWB News Radio.

He had this delivery as if Joe Friday from Dragnet was telling the news.  Just the facts ma'am. And the coolest thing of all was his sign off when he finished his story. He would say in that rough gravely voice of his "Car 98....Out!"

I wanted to be Gary Franklin on KFWB News Radio when I grew up.  So you can imagine my excitement when he came out to speak at an awards ceremony for Orange County High School Journalists (where I won three awards in 1976).

I asked him what it takes to be a good reporter.  He told me, "Kid, you have to live and breathe the news 24-7.  You have to be ready to report at a moment's notice."  It doesn't seem like there are a lot of reporters like that anymore.  If there were any, they seemed to end up on KFWB.

This isn't the only time in the long history of KFWB, which started in 1925, that they have gone through a format change. This is only the fourth format change in close to 90 years on the air.

It started out as a promotional radio station for Warner Brothers Films.  Thus the KFWB name.  Some people thought it stood for "Keep Filming Warner Brothers".  It then was a music station, first for Swing and Big Band Music (Remember the Seven Swingin' Gentlemen?) and then for Top 40 music.

As the sixties progressed it was becoming apparent that the AM Top 40 format was dying and losing ground to FM music stations and over saturation, so KFWB and long-time rival KNX 1070 went into the all news game, following the successful all news stations in New York.

That was in 1968 and Southern California has had those two news resources until this week for over 45 years.

It was great when the two stations were actual rivals.  When a breaking news story was happening like an Earthquake or a Fire or the LA Riots I would quickly turn to one of the stations to see who was covering it better or who was on the story the quickest.  It would be a draw many times.  It was that competition that drove each of the stations to be better I believe.

But that all changed when both stations were owned by the same company not too long ago.  CBS bought KFWB's owner Westinghouse and then they were no longer rivals.

They both kind of morphed into the same station.  They both stopped becoming "All News all the time" and roughly started feeling more like a radio version of CNN with a mix of news and news talk.  KFWB started running info-mercials on the weekend.  Both stations started using reports directly from the reporters of their television affiliates and they carried sports play by play and other programming.

I guess it was inevitable.  With the proliferation of all news and information stations on cable and satellite television and satellite radio, the internet news sources and social media (Twitter, Instagram, and Facebook) we are getting our news quicker and at the literal touch of a finger. Any place, any time.

Just this morning, I didn't get the news about the earthquake in Northern California via radio news.  I got it through Twitter and Facebook on my I-Phone.

But still I believe there is room for another News Station on terrestrial radio in the LA area.

I am looking and hoping for one of the six sports stations we have to change format.