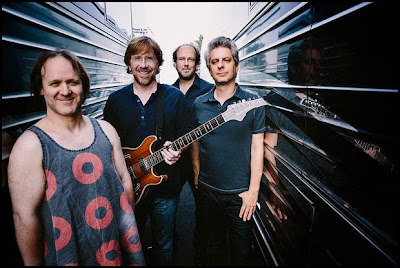 The biggest challenge with any Phish album is to capture the same magical sound and energy in the studio as when they perform live.

Save for maybe the legendary Grateful Dead, the Vermont group has probably the most loyal community of followers,  the Phans, who love traveling with the band and recording their shows and exchanging those recordings with fellow Phish fanatics.

Phish,  who has been been together now on and off for over 30 years and have recorded over 1500 live shows, may have re-created that feeling better than any of their eleven previous albums on their latest entitled Fuego.

The recording is their first studio record in five years and is their finest work since 1996's Billy Breathes.   The album is due out on Tuesday (6.24.2014).

Perhaps the biggest influence in creating that feeling of their live shows on a studio recording was their producer Bob Ezrin who has helped create noteworthy and classic albums for the likes of Pink Floyd, Lou Reed and Peter Gabriel.

Ezrin was adamant about having the feel of Trey Anastasio, Jon Fishman, Page McConnell, and Mike Gordon playing in the same room and reacting in real time.

Fuego was recorded in Nashville and the famous Fame Recording Studios in Muscle Shoals, AL, before the band finished together at its studio in Vermont.

The latest album seems to have something for everybody and as the case on most of the band's previous albums crosses over several genres.

In two songs that are sure to become crowd favorites during the live shows, the nine minute opening title track "Fuego" and the final track "Wingsuit" (clocking in over 6 Minutes) features Anastasio's wonderful guitar rifts and Fishman's percussion, with the latter song destined to become an instant classic.

"Sing Monica" is a fun and catchy rocker.

"Waiting All Night" is destined to be a staple on Smooth Soul radio.

Producer Ezrin spreads the singing duties around too.  For instance keyboardist Page McConnell on "Halfway to the Moon" is in perfect balance with Anastasio's vocals. All members of the quartet get involved in the albums opening and title track.

Phish's members have always been incredible musicians, but their lyrics usually border on the nonsensical.  Phish can be silly, with lyrics reminiscent of They Might Be Giant.   In "Wombat" they have lines like

It's like the Fish TV Show
You know the one with Abe Vigoda?

And I said I'm sorry, but you went so far away
Don't know why you left me this way

Then there's my favorite song on the album "The Line"  The song is based on a true story of a Memphis college basketball player who missed key free throws during a championship game.

In the final analysis, the album does a great job of appeasing the most fanatic of the Phans and will leave you waiting to see how these will be worked into future live performances.  But it also is a good primer to the neophyte Phish fans who are looking for an excuse to get into their music.

From both perspectives, Fuego is definitely worth a listen.