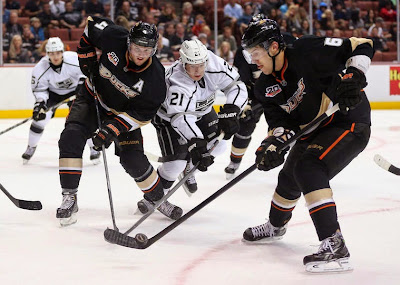 
It took twenty long years but hockey fans in Southern California finally have the Playoff Matchup we always wanted and dreamed of.

Tonight at 5 PM Pacific Time, two teams that are separated by a 25 mile stretch of Interstate 5, the Los Angeles Kings and the Anaheim Ducks, will face-off for the first ever Southern California Civil War Frozen Freeway NHL Playoff Series.

I live in Orange County, CA in Fullerton, which is literally a slap shot from the Anaheim Ducks home, The Honda Center.  My son played Ice Hockey in the Duck's Training facility, originally called Disney Ice, then Anaheim Ice.  I love my home County Ducks.  I'm an un-abashed self-proclaimed homer.

But...before there were the Anaheim Ducks, there were the Los Angeles Kings and if you were a kid growing up in Southern California in the late 1960's and early 1970's and you liked hockey, you were probably a Kings fan.

It wasn't easy growing up and being a Los Angeles Kings hockey fan in Southern California in the late 60's and early 70's.  You would go to school and say "hey did you see that great save that Rogie made last night or, Did you see that goal by Marcel" and nobody would know what the heck you were talking about.  Unless of course, you had friends like Chris Bretal and David Boos..the only other two kids at Nicholas Junior High in Fullerton other than myself who knew anything about the game of hockey and the Los Angeles Kings.

We were so much into hockey that we even organized a daily game on the tennis courts at lunch time.  As you might have noticed there is not much ice in Fullerton, Orange County, California so we had to improvise.  So we played without ice.  One time, gasp, a couple kids were actually playing, of all things, tennis at lunch on the tennis courts so we had to move to one of the many asphalt basketball courts on campus.  But we liked the tennis courts most because it was smooth concrete and most resembled the ice surface and the puck moved more like it does on ice.

David Boos had a goalie mask like Jacques Plante even down to the faux stitches on the plastic face.  Every time he would take a slap shot to the face he would draw another stitch on the mask.

David and Chris had a few sticks so they would share with the rest of us.  One time I was winding up to take a shot and I heard a crunch.  I had broken one of Chris's sticks in half.  I had to use my new Puma tennis shoes in place of the stick ala soccer style.  This is where I quickly discovered Puma tennis shoes are not good for playing hockey and kicking pucks with.  The first day I tried it, I went back to kick the puck and the whole sole of the shoe split off from the rest of the shoes.

Of course, as we played hockey we had to imitate the voice of the Kings.... Roy Storey.  He was the announcer before the legendary Bob Miller began his run.  Storey had this gravely excited voice and he would punctuate and annunciate everything.   So we would be saying stuff like..  "He winds....He shoots.....He..Hit..the....Post!"

It seemed the Kings hit the post a lot in those days.   I used to watch their games on a black and white TV on KTLA channel 5 ...which by the way is where I got the idea to have the Kings wear black and white instead of looking like the Los Angeles Lakers on skates.   And because nobody wanted to see them play in other parts of the country they were never on the NBC Saturday Game of the Week with Tim Ryun announcing.

The Kings always seemed to be a step slower than the team we were playing against like the Black Hawks or the Bruins or the Canadians or the Maple Leafs which I think were the only other teams in the league at the time....pretty close.

When you get right down to it, it's hard to believe that we actually have three hockey teams in the state of California.  I am old enough to remember a time we had one team, well two if you count the short-lived California Golden Seals but they were not that good and the Kings rarely made the playoffs in the early days.

Two events put California on the map Hockey wise in my opinion.  One was when LA Kings owner Bruce McNall brought the legendary Wayne Gretzky to the Kings in the early 1990's.  The other was the perfecting of the inline skate.

Up until then, if you were a kid growing up in Southern California and you wanted to play Hockey, rink time was nearly impossible or too cost prohibitive and of course there was no ice on the ground in this region.

But the inline skate, and the fact it closely simulated the ice skate and there is miles of concrete and asphalt to skate on was a game changer.  As the popularity of Hockey grew, with everybody embracing   "The Great Gretzky" and the Los Angeles Kings and the newly formed San Jose Sharks and Anaheim Mighty Ducks the game took off and more Ice Rinks were built.

Back to the Series that starts tonight.  Take away the regional matchup, these are two great Hockey Clubs peaking at the right time.  Or in the Ducks case...Re-peaking.

The Ducks had the best regular season record and the number one seed going into the playoffs, but the upstart Dallas Stars figured out a way to get into their heads and played the Ducks rough and tough in an extremely physical first round series.

With the Stars up two goals in Game Six with two minutes to play, it looked like the two teams would be going back to Anaheim for a Game Seven.  But the Ducks staged a miracle finish scoring two goals in the final two minutes and took the game into overtime where they scored the game winner.

In the other opening round playoff series between the Kings and the Sharks....a NoCal vs. SoCal matchup, the King's staged the most improbable of all comebacks.  The Sharks had a commanding 3-0 series lead and had the Kings left for dead.  The Kings went on to win the next four and became one of only a handful of professional sports teams to come back from 3-0 deficit to win a playoff series.  I think I read some where that when teams are down 3-0 in a series there is only a 1% probability that they will come back to win the series.

So here we are.  I will be rooting for my Home County Ducks to win the series and go on to win their second Stanley Cup.  But if the Kings happen to win the series,  it will not be the most disappointing sports thing that has ever happened to me.  (That is still from 1986 when the California Angels were one strike away from going to the World Series, lost the ALCS to the Boston Red Sox and did not go to the World Series for another 16 years)

I would then re-vert to my first favorite Hockey team and root for the Kings to win their second Stanley Cup.

At any rate it's going to be a great series and I can't wait for it to get started.