Foster The People Comes of Age 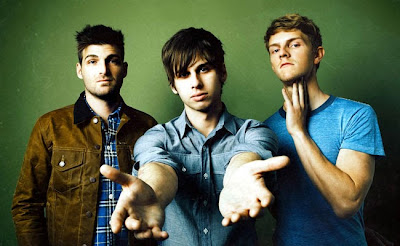 The only questions I would have for Mark Foster and his band Foster The People after the success of their 2011 album Torches, would be, how do you top that?

How do you grow and build on that mega hit of a freshman release that garnered three Grammy nominations and one Grammy win for the "Houdini" video?

Or do you even want to evolve artistically on your follow up album and cater to the Record Label and the fans desire to repeat what made you successful in the first place with songs lie "Houdini" and "Pumped Up Kicks" (arguably the song of Summer 2011)?  I suppose it's part of the growing pains that most of the great musical groups go through.

Interestingly, somehow, they were able to achieve a little bit of both.

First of all, everything I loved about the band's first album is still there.  Like the poppy, fun and danceable beats, and vocals (reminiscent many times of early Beach Boys and 60's pop),  juxtaposed against serious themes in the lyrics.

But after all it has been three years since the initial wave of success, and the band is far removed from being a local, cult favorite in Southern California.

FTP had to deal with the roller coaster ride of sudden worldwide success and fortune and the lyrics on this new album from an older and wiser Mark Foster (now 30 years old) definitely recount some of those feelings and thoughts that occur when mega stardom happens suddenly.  It's as if he finally had a chance to slow down and reflect on what has happened to his life.

For instance, in the last track "Fire Escape" Foster's lyrics speak to the difficulties of trying to achieve success in Hollywood and Los Angeles.  For every person that is fortunate enough to make it, there are literally hundreds of people that don't make it and are left as proverbial road kill by the system.

And I've watched the dreamers find their legs, and I've seen the ones that come get reduced to bones and dregs. 'Cause I am a fire escape, my spine is made of iron and my heart pumps out old red paint...

In the first single from the album, "Coming of Age"(the song the band performed on The Tonight Show this past week) which features a great soaring falsetto by Foster near the end (ala The Beach Boys), it seems to get personal, as he talks about moving forward and the pain of growth.

You know, I try to live without regrets. I'm always moving forward and not looking back. But I tend to leave a trail of debt while I'm moving ahead. And so I'm stepping away 'cause I got nothing to say. Feels like, feels like I'm coming of age.

On "The Truth," Foster utilizes alternately a David Bowie like baritone and soaring falsetto to charter a "World that's so Broken." It demonstrates that Foster the People isn't satisfied with just having something to say....they want to make sure they say it in the most interesting way possible.

FTP does not seem to be opposed to growing and experimenting musically either.  On the opening track, "Are You What You Want To Be?" the band uses a wonderful Afro World Beat vibe to great success.  (Maybe the fact that this track was recorded in Morocco had something to do with that). "The Angelic Welcome of Mr. Jones", the shortest track on the album, is a psych-gospel vocal interlude that clocks in at a mere 30 seconds.

On "Pseudologia Fantastica" Foster channels the style of Tears for Fears on "Sowing The Seeds of Love" or the Beatles and John Lennon's late 60's psychedelic sound. With a cosmic, mega-distorted guitar tone as the backdrop, the lyrics are anthem-like, hopeful and optimistic: "You've got to get back up and face your demons / Don't ever be afraid of starting over."

I suppose if Foster really wanted to make people think he had created "Torches II," his "Best Friend" (my favorite song on the album) would be the single that he should have released first.  Like "Pumped Up Kicks," (and unlike Neil Young's "Needle and the Damage Done"), Foster's dark lyrics on this track about your best friend being hooked on drugs doesn't match the upbeat music that goes with it.

In short, FTP's latest is a great follow up to the band's first album and deserves a listen.