Sid Caesar And The Original SNL 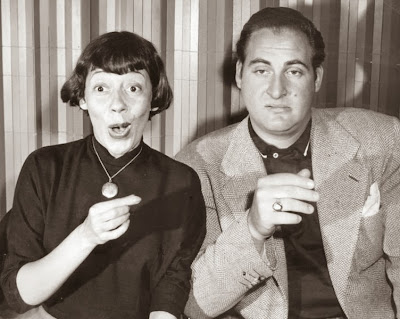 Long before there was a Saturday Night Live there was Your Show of Shows.

Before there was Lorne Michaels, there was Sylvester "Pat" Weaver.

The latter group I like to call the original Not Ready for Primetime Players.

This past week we lost a true comic genius, television trailblazer, and the ringleader of this pioneering television variety show when Sid Caesar passed away at the age of 91.

Caesar and the original Not Ready For Primetime Players, began Your Show of Shows in 1950 (25 Years before Saturday Night Live started) and it ran until 1954.  It's successor, The Caesar Hour lasted for  two additional years.

Your Show of Shows was a 90 minute live television program which ran every Saturday night on NBC Television (as SNL currently does).  The show featured topical adult humor, parodies of TV, radio, and movies, and recurring skit humor.

SNL acknowledged this by giving Sid Caesar honorary Not Ready For Primetime Player status.  He is the only person to receive this honor.

Your  Shows of Shows however, was the first Variety Show that was born of and utilized the new medium to it's full potential.

I was recently re-visiting  a wonderful sketch that Caesar and Imogene Coco acted out on the show.  It was a couple pantomiming an argument to classical music.  No words were spoken...just acting, gesturing and facial expressions.   And it was funny and brilliant.  And I was thinking all the time there could be absolutely no way this could have been done on radio.

Your Show of Shows also laid the framework on how a Live Weekly 90 minute Variety Show is put together.  That basic blueprint is followed to this day by SNL.

The amazing thing about Your Show of Shows when compared to today's SNL and it's really a function of technology, more than anything, is the fact that it was a true live 90 minute show.

SNL, since the inception has inter-spliced pre-recorded television commercial parodies and films into the 90 minute show.  That was not the case for Your Show of Shows.  It was live for the entire 90 minutes.

The other interesting and amazing thing is that the performers actually did everything from script (as if in a live theatrical production or play) without the use of cue-cards or a tele-prompter.  No ad-libbing was allowed by the Directors of the Show.

The show also launched the careers of some well  known writers that would go on to make their mark in television, theater, and film.   Mel Brooks (Get Smart, Young Frankenstein, Blazing Saddles), Neil Simon (The Odd Couple), Danny Simon (The Carol Burnett Show), Mel Tolkin (The Danny Kaye Show), and Carl Reiner (The Dick Van Dyke Show) were the writers for Your Show of Shows while Larry Gelbart (MASH) and Woody Allen (Annie Hall, Midnight In Paris) wrote for the Caesar Hour.

One of the tragedies of this legendary show,  is the fact that very few episodes actually are still available to watch.

I guess it was the only downside and a casualty of  doing a live television show in the early 1950's.  The show was not  filmed as would be the custom for a syndicated show of the era and video tape would not be perfected and utilized until several years later.  Kinescopes (the method of filming shows from a television monitor that was prevalent in the 50's) were made of YSOS but first of all, those were crude in comparison to if the show was shot with three cameras and on film.

Then, somewhere along the line, somebody got the ill-conceived idea, in an effort to save space I suppose, to throw away or destroy most of the Kinescopes made of Your Show of Shows.  So the bulk of the episodes of one of the greatest shows in television history are no longer available for fans to watch, learn, and enjoy.

There was however a great discovery made in the year 2000.  Most of the original scripts of entire episodes of Your Show of Shows  were found.

I think it would be a wonderful idea to utilize those scripts and re-produce live on Television some of those shows in their entirety as they would have been seen on a Saturday Night in 1950 or 1951, with contemporary actors and inter-splicing as many of the existing original Kinescopes from the actual show that still exist.

Perhaps a bit haughty but I'm reminded of Aeschylus, the ancient Greek playwright. Only seven of as many as ninety of his plays survive. We can only imagine the greatness lost to the ages.
Fortunately, for YSOS there are, at least, the scripts. But I wonder if anyone can come near to matching the comic genius of the original artists. And even if it was done as well as, or even better that Sid Cesar, it just wouldn't be the same.