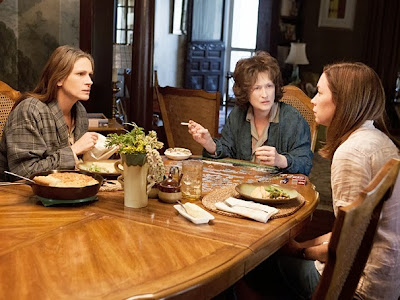 I am not entirely sure why a sad film about a majorly dysfunctional family that takes place in the sweltering summer month of August gets released on Christmas Day in the dead of Winter,  but this is when the studio decided to release the Award-Winning play film adaptation of August: Osage County.

Maybe it's because no matter how dysfunctional you think your family is (especially around the Holidays), it can't possibly be worst than the Westons of Pawhuska, Oklahoma.

For those unfamiliar with the play, the story centers on sisters Barbara, Karen, and Ivy Weston (played in this film by Julia Roberts, Juliette Lewis, and Julianne Nicholson respectively) as they are called home when their father, Beverly Weston (Sam Shepard), goes missing.

They have stayed away from their mother Violet (Meryl Streep) because she has become addicted to pills after getting mouth cancer.  They then learn that their father has drowned himself.

The entire family gather for a funeral dinner, led by the brutally honest Violet, fueled by prescription drugs and alcohol,  who claims she is just "truth telling". Eventually, as the movie progresses we learn of the sisters' back stories.

The story is really about the choices we make and how our actions effect not only ourselves but others in the future.  Like "It's A Wonderful Life" in reverse.

As in the play, Osage County is like watching a train wreck, or in this case, multiple train wrecks or disasters in succession.  You probably shouldn't watch, but as each of the back stories unfold, you are sucked into the presentation, wondering what bit of nastiness and ugliness is going to be revealed next.

Make no mistake, even though this film and play is advertised as a Comedy-Drama, there is very little to laugh about here.

There are many great plays that do not need to be made into movies.  Many times the dialogue, acting, and a simple set is enough to carry the live performance.  But August: Osage County is actually one of those plays that benefits and is enhanced by being transferred to film.

Wonderful cinematography from Adriano Goldman and on-location exteriors on the desolate Plains and Towns of Oklahoma add an extra dimension you can not see in a live production.

As in the play, the performance from the actors are the key to the success.  The movie version benefits from an All-star cast led by outstanding performances by Meryl Streep and Julia Roberts.

The roles of Violet and Barbara Weston stretch the range of emotion of the actresses that have played those roles in the stage production and who better to play these roles in the movie than arguably two of the Best Actresses of this generation.  There is no doubt they will both garner Academy Award consideration (which by the way is the answer to why this movie got released at the end of the year).

The choice of Director of the film is also interesting too when you consider that John Wells developed a show about the most functional-dysfunctional family on TV on Showtime's Shameless.  In fact, there are moments of Osage County that you could swear you are watching the Gallaghers from Shameless in action.

The Producer Jean Doumanian is also interesting in the fact that she produced six of Woody Allen's movies and this play, seems to borrow from themes in Allen's writing.

The playwright Tracy Letts adapts her well-written Tony and Pulitzer winning play here, but there is little changed from the play version which is a good thing.