Elvis Costello Goes Back to the Roots 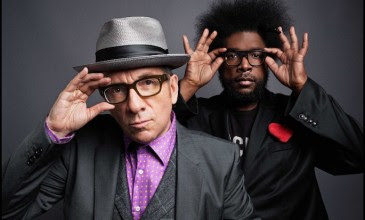 When I first saw Elvis Costello playing with The Roots on Late Night With Jimmy Fallon earlier in the year during "Bruce Springsteen Week" performing "Fire", my first reaction was, "Those guys gotta record an album together".  Then there was Costello and the Roots at a Prince Tribute concert at Carnegie Hall in March.

The chemistry was so strong, it just seemed like a natural.

And why not, Costello has worked with everybody from Paul McCartney, T-Bone Burnett, Allen Toussaint to Burt Bacharach.  Not to mention everybody that crossed his stage on his wonderful "Spectacles" show on the Sundance Television Channel.  So why not collaborate with the hardest working band in the business right now and Philadelphia's most influential Hip Hop Band, The Roots?

Be careful for what you wish for.

In April of this year, Costello and The Root's ?uestlove announced they were indeed working on an album and instantly it became my most anticipated album of the year.

So here we are almost two weeks from the drop date (9.17.2013) and the music from the album, Wise Up Ghost is starting to be released and it is everything that you could hope for and more from the two collaborators.

From the very first of the fourteen original tracks, "Walk Us Uptown" to "Stick Out Your Toungue" to "Wise Up Ghost" the sound is a wonderful fusion of The Roots unmistakable sound and vintage Elvis Costello from his early My Aim Is True era of nearly 35 years ago.

The lyrics are strong, relevant, well written and concise.

Most of the sessions took place at Feliz Habitat Studios after hours in secret, while other sessions were very public at Costello’s Hookery Crookery Studios.

Costello describes the record as “the shortest distance between here and there” and containing “both rhythm and what is read”.

?uestlove describes the album.  “It's a moody, brooding affair, cathartic rhythms and dissonant lullabies. I went stark and dark on the music, Elvis went HAM on some ole Ezra Pound shit.”

In addition to the Root's crew and friends, the record features a guest vocal appearance on “Cinco Minutos Con Vos” from La Marisoul, lead singer of the Los Angeles group, La Santa Cecilia.

The album is produced by longtime Roots associate, Steven Mandel together with Elvis Costello and ?uestlove.

The album is a must listen for both fans of the Roots and Elvis Costello and should garner a lot of attention at Grammy time.