Riding Through the Rockies on the Zephyr 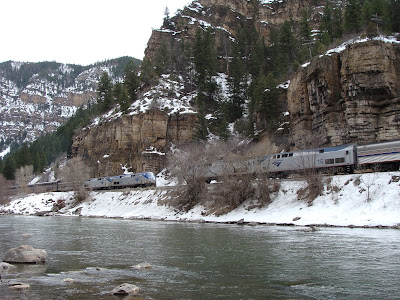 Peering out the window from my seat of the California Zephyr Amtrak train as I arrived in Sacramento, I came to the conclusion this has to be my favorite train ride through America. And I've ridden the rails and driven through this great country of ours several times in my over fifty years on the planet.

The route is basically the same as the original Union Pacific Silver Zephyr trains from the mid 20th Century.

I picked up the Zephyr in Chicago and the train made it's way through the spacious plains of Nebraska to Denver, across the Rockies to Salt Lake City, through the deserts of Nevada and Utah and then through Reno, Sacramento into San Francisco.

On this trip you see up close and personal the Sierra Nevadas, Colorado's Gore, Byers and Glenwood Canyons, the Truckee River, Donner Lake, as well as San Pablo Bay and Carquinez Strait.

At one point in the Colorado Rockies you go through the Moffat Tunnel and are plunged into sheer darkness for several minutes, and you can't see your hand in front of your face.  An experience I had not had since I went to the Tom Sawyer Caves outside of Hannibal, Missouri as a kid.

The interesting thing at the tunnel is the Continental Divide.  As you go into the tunnel you will notice that the water flows one direction.  As you emerge out of the tunnel, it flows the other way.  I had heard about that, but to see it...that was cool.

The service was wonderful on my trip.  The Amtrak staff was attentive and friendly.  But, as an aside, as on any train ride, you have to approach it going in from a positive point of view.  I know of several people that have had a negative approach going into riding the trains in America, and sure enough, as if it were a self-fulfilling prophecy, they did not have a great time.

Train travel is certainly not for everybody.  There are inevitably going to be delays (my train was running 12 hours behind at one point due to an incident outside of Chicago...ok it was a bomb threat) and this is not a Luxury Cruise Ship...although with the recent track record of one cruise line I would argue it's better.

Look at it as an adventure and glorified camping on wheels..and you'll be fine.

The benefits far out weigh the drawbacks.  For instance, the scenery on this route is breathtaking and you see it from an entirely different perspective than if you were driving.

I have driven Route 70 several times through the Rockies and although sometimes the Zephyr gets close to that Interstate road at times, you actually get a chance to see it from a different angle.  You don't realize how much of your focus is on driving until you are looking out the window of the Zephyr observation car and taking in and enjoying the scenery.

As on most cross country train trips, you meet several great folks from different backgrounds and when you have a meal in the dining car you are seated with at least three of these people.  Interesting conversation and new friendships are made as the beautiful scenery rolls by outside the window next to you.

Folks from the National Forest Department joined us in Denver and had a wonderful presentation in the Lounge car on what we were seeing as we rolled through the Rockies.

As I rolled along, I discovered a rare Hank Williams song to describe the trip

See her rockin' see her rollin'
As she rambles on her way
She left L.A. this morning'
Burnin' up the right of way

She leaves the city of the angels
Headin' for ole Santa Fe
She's a makin' nauts, she's makin' time
Just watch her swing and sway

One of my next trips would be to take this journey on one of the restored old Union Pacific Zephyr trains.