The Gospel According to Mavis Staples 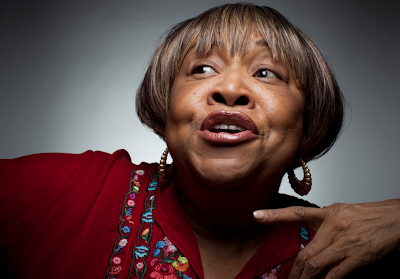 As a young teenager going through my first musical exploration stage, I remember distinctly hearing for the first time the powerful and joyful music of the Staples Singers.  It was from that moment that I became a big fan of R&B, Soul and Gospel Music.

Over forty years later, the young lady I heard on those records with her family is still going strong at the age of 73 and on Tuesday she will release her fourteenth solo album, One True Vine

Vine is a very simple, yet interesting record because, Staples, with that rich, dusky vocal expression of hers starts the record slow, with songs like "Holy Ghost", "Every Step", and "Jesus Wept".  We can almost feel the pain and walk in the shoes of somebody that is looking for redemption and a healing power.

As the album moves along, she builds up the pace and as Gospel Music usually does, gives us hope.  Not sure if that was done intentionally or if that is just the nature of this musical genre but the result is a well done and joyful listening experience.

This is the second of Mavis Staple's albums that have been produced by Wilco's Jeff Tweedy and his stamp is definitely felt all over the album.  He plays most of the instruments, wrote three songs, and has his son even plays drums on some of the tracks.  But as the good producers do, and as he did on Staples 2010 album You Are Not Alone, Tweedy steps aside and lets Staples shine.

This new album also features songs written by Low ("Holy Ghost") , Funkadelic ("Can You Get To That"), and Nick Lowe ("Far Celestial Shore") in which Staples puts her own unique spin.

Under the direction of Tweedy and friends, combined with the powerful force that is Mavis Staples, this album is almost assuredly a front runner for her second Grammy in the Gospel Category.